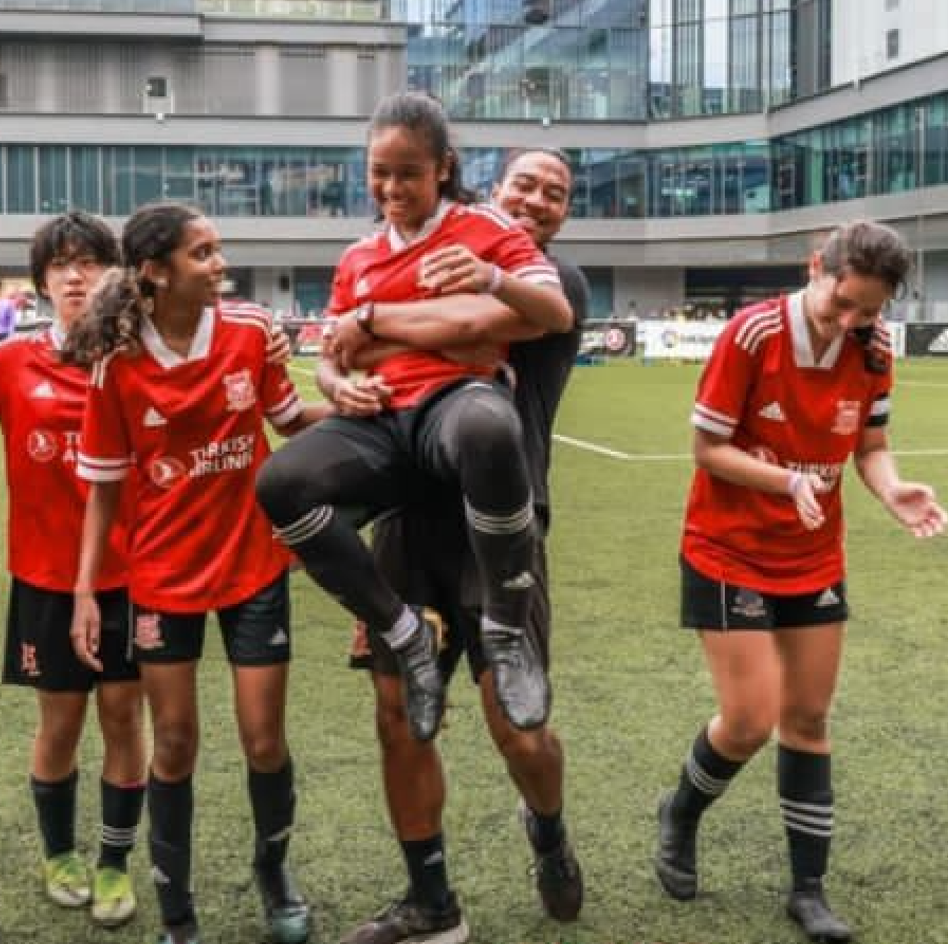 Local football academy JSSL has defended the actions of its coach Joseph O’Sullivan after a photo was posted on the academy’s own social media account showing him lifting a young female player, also a national U16 player, from the back during the recent JSSL Singapore Professional Academy 7s held in early September.

The player in question is Nahwah Aidilreza, a member of the JSSL U16 team.

The photo was posted on the academy’s social media account but was scrubbed soon after there was some level of discomfort.

The photo was sent to TMSG by a parent who asked, “Where was the safeguarding of the player’s personal rights?

“The young female player would not have been able to defend herself if she did not like what the coach did to her.”

A former national footballer, currently also a youth coach, said he was shocked by the action of the JSSL coach.

“Would a male teacher in a Singapore school do such a thing to a young female player and what would be the consequences if there is a complaint?”

TMSG also sought the opinions of eight women, all between the ages 22 to 26 on the lift by the coach on the player seen in the photo.

They were unanimous in that the action was “not acceptable” and “inappropriate”.

Under the Safe Sport Unified Code, the act of the coach would come under the “Inappropriate Physical Contact” portion.

A spokesperson for JSSL, defended the actions of its coach O’Sullivan, who has been in Singapore with JSSL for two years and added that he will be reminded of the “guidelines for Safer Sport”.

“Joe has been a coach with JSSL for two years and is well-regarded by his players and their parents.

“The photo was captured during a moment of celebration after a hard-fought victory.

“We will remind Joe and all our coaches of the guidelines for Safer Sport.”

JSSL also added that that all its coaches undergo “safeguarding courses twice a year.”

“In addition, JSSL coaches will also be attending the Safe Guarding course conducted by Sport Singapore.”

JSSL also added that all its coaches are “subjected to full security checks by an authorised third-party to ensure a secure and safe environment for all.”

JSSL also reiterated that O’Sullivan attended a safeguarding course in the United Kingdom where he received his coaching badges.

The girl’s mother also offered her thoughts on the photo.

Said Mashari Mahadi, “When we first saw the picture, we were ok with it and we were even there during the celebrations which happened after the team defeated Lion City Sailors (LCS) during the sudden death semi-finals.

“If we were not happy about it, we would have informed Joe or the organiser on the spot and not waited till the picture was published and even take her out of the team if we were uncomfortable with the whole issue.”

She added that the victory over the LCS “was a superb ending to a tough match” and the “celebrations was (sic) in order.”

Mashari also stood up for O’Sullivan as a coach.

“He is a dedicated coach to the girls’ team and due to Joe, Nahwah has become a better forward,” she said.

“He really cares for the players’ development and he really knows how to instil the fighting spirit in the girls both prior and during matches and it is only right for Joe to join in the celebration as well.”

In a separate incident reported first by TMSG at the end of July, a coach at a youth football academy allegedly sent inappropriate photos by direct messages to young female footballers.

The coach has since been sacked by the academy.