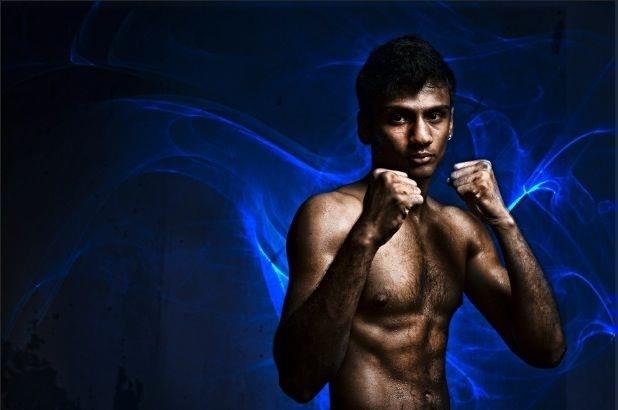 The other is immediately after his bout in the final of the 2015 Southeast Asian Games in Singapore, where his left eye looked like a tennis ball.

He had written  on his Facebook page back in 2015, after the final that “gold medal doesn’t determine champion, determination does!”

Former Minister of State for Trade and Industry Teo Ser Luck had posted on his Facebook page on 12 June 2015 how Hanurdeen had “fought back even with the vision of only one eye” and called him a “real fighter” who “inspire us.”

Disappointments aside, Hanurdeen, who turns 25 in August this year, now has a new target – to qualify for the 2020 Tokyo Olympics.

And he is all set to train full-time for as he prepares for his goal of qualifying for the Tokyo 2020 Olympiad.

“Now that I have completed my National Service commitments, I can focus on my goal of making the Tokyo 2020 Olympics.”

Hanurdeen picked up a bronze at the Kuala Lumpur SEA Games in 2017 and was a silver medalist at the 2015 SEA Games in Singapore.

He has also won the gold in a few other events such as the 2013 North Sulawesi Cup in Indonesia, and the 2010 and 2012 Penang International tournament.

To qualify for the Olympics, Hanurdeen will need to compete in qualifying tournaments which are set by the International Boxing Association.

“It will not be easy, but I have decided to give it one shot, and train full-time for it,” said the flyweight.

To train full-time, Hanurdeen is expecting to sign a major sponsor which will help him cover the costs of his daily requirements, and his training and traveling needs.

“I have one chance to achieve my dream of representing Singapore at the Olympics. I have come this far in boxing, and all I want is to try for that one final goal of making it to the biggest sporting stage in the world.”

Ahead of the Tokyo 2020 Olympics, Hanurdeen is also aiming to get the nod for the 2018 Asian Games in Jakarta later this year.