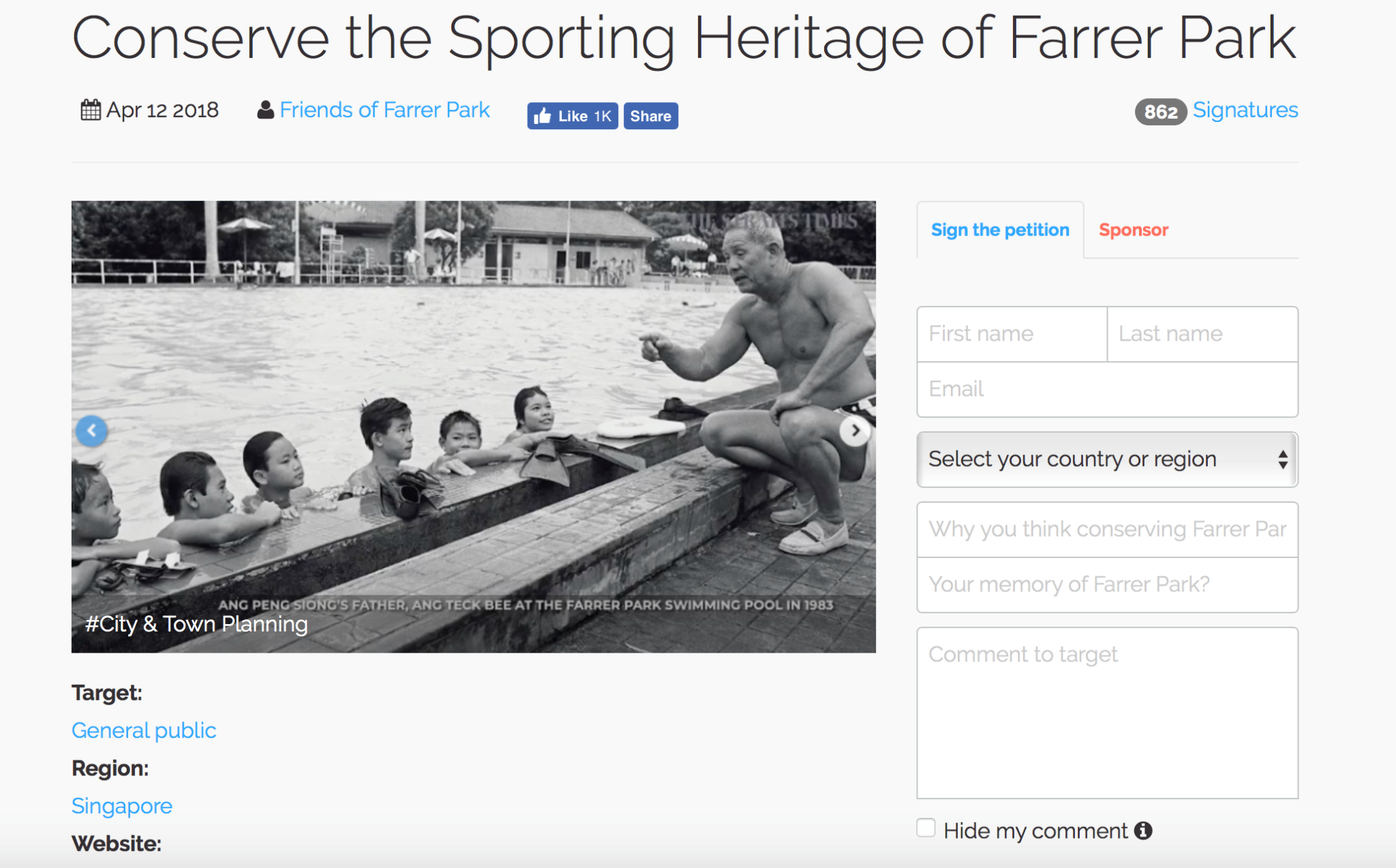 Farrer park that currently holds a boxing gym, a field and a swimming complex, has a sporting history that stretches as far back to the colonial period. Other than being the first racecourse in Singapore and the park is also the training ground for many of the track and field stars and national footballers.

However, this Singapore heritage will soon be gone for the purpose of residential redevelopment. As SportSG is relinquishing the land back to the state, all structures in the park will be demolished by 2020.

The petition has since been seen by more than 22,000 people and has received more than 800 signatures.

A quick glance at the those who have signed the petition are; Paralympian Yip Pin Xiu, former Nominated MP Eunice Olsen and social activist Braema Mathi.

Farrer Park, which is located near the Istana and is beside the Land Transport Authority, is considered prime land. It has been the venue for some of Singapore’s most momentous occasions.

In her Instagram post, Paralympian Theresa Goh said: “I understand the need for an ever-changing world and to constantly build up in Singapore. But, when we hear worries of the younger generation not knowing their heritage and history, it’s especially hard when it comes to sporting history. How can we expect to build on our sporting culture when we keep wiping it clean? The memories are aplenty, I’ve put in a tonne of blood, sweat, and tears, and it’s truly sad to have to see it go.

Former national sprinter UK Shyam said in a Facebook post can “pragmatism cannot always be the sole consideration when we make decisions and ascertain value.”

Former sports journalist, Jose Raymond, added on Facebook that “Farrer Park is not just another place” and that it is a “part of our social history”. “Development, but at what cost?” he asked.

Apart from the sports exploits, Farrer Park was the site of a massive rally by People’s Action Party (PAP) on the 15 August 1955 for self-governance from colonial rule. The PAP was then an Opposition Party to Singapore’s Labour Front government led by chief Minister David Marshall.

It was also a place to witness the historic first airplane to ever land in Singapore on the 4th of December 1919 by Captain Ross Macpherson Smith. In March 1986, Farrer Park was also used as a landing ground for the Republic of Singapore Air Force helicopters to rescue survivors from the Hotel New World disaster.

Edwin Pang, in a letter to the Straits Times Forum page, asked that the area be preserved for its “historic firsts.”

He added that “we have already lost a treasure trove of local sporting memorabilia and records due to a fire that destroyed Farrer Park Sports House, which housed more than 40 national sports associations, as well as the Athletic Centre, which has been demolished. I hope we will not lose whatever historic structures we have left in the area.”

This story was first published on The Online Citizen