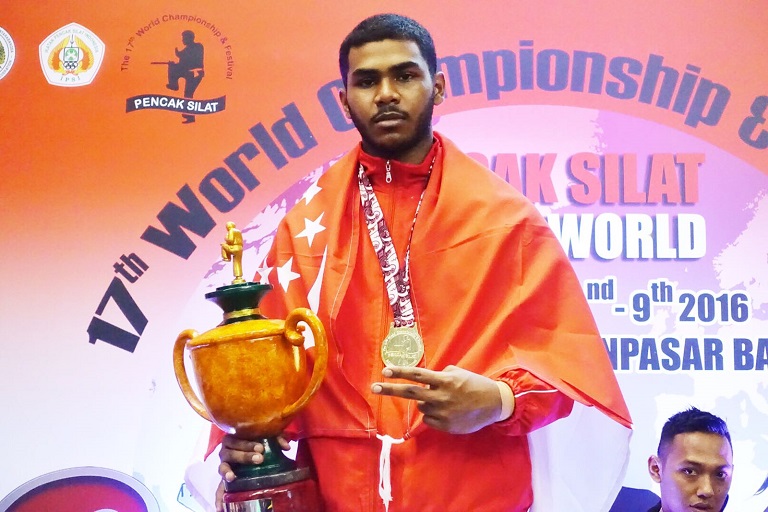 His father Sheik Alau’ddin was a two time World Champion in silat.

And it looks like 20-year-old Sheik Farhan is stepping into his father’s illustrious shoes as he takes on the world in his sport of choice – silat.

The elder Sheik won four Southeast Asian Games gold medals in silat and was a two-time world champion as well.

Later this month, Sheik Farhan will participate at the Asian Games which is being held in Jakarta and Palembang in Indonesia, as Silat is one of the sports which has medals at stake during the Games.

Still, Farhan feels the pressure of having the Singapore flag on his chest as he strikes out to make a name for himself and extend the sporting legacy in his family.

He added: “Everyone who is in silat, whenever I go for the national championships, they know me not just as my father’s son. They acknowledge me and they know who I am,” he said in a video posted on the Singapore Silat Federation Facebook page.

He also doesn’t worry about people not recognising that he is already a two time world champion in Silat.

“For the people who watch, they know. For me, it is enough because I am not the type who wants people to know so much about me.”

But despite having so many accolades under his belt at age 20, Farhan looks forward to every bout like it was his first time at representing the country.

“The first time I won was special. There was no expectations and it was more like a hobby for me. Being able to represent Singapore is a big opportunity and to bring glory was even better.”

And he does not really feel hurt when people do not recognise that he is a world champion, with multiple accolades under his belt. He is hardly recognised on the streets unlike the adulation given to other athletes like swimmer Joseph Schooling or even footballer Hariss Harun, who plays in Malaysia.

“For the general public, it doesn’t really bother me too much. Maybe it is just that it’s not in their nature to really watch this kind of sport. Maybe if I go to Indonesia, more people will know me because that is where I won the championship and some people travel to watch so it is different.”

Looking ahead to the Asian Games, Farhan is well aware of how a gold medal could well change his life.

“I think everybody is fighting for that one chance just to win. But they are constantly trying because even though they get insulted or constantly not being dependent on others. But when you get that one elusive gold medal, it can change your life.”