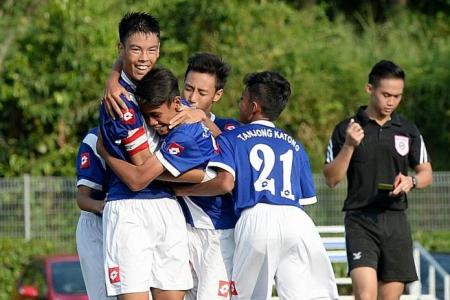 The National School Games (NSG) Football tournament for ‘B’ Division boys have turned up some really eye-catching results.

Some football observers even questioned if the computed results on the official website were actually a mistake, as some scores resemble rugby scorelines.

The Singapore Sports School hammered the Canberra Secondary School 21-0 and also put 29 goals past the NUS High School of Mathematics and Science in a 29-0 scoreline.

Football Association of Singapore (FAS) Council member Yakob Hashim believes the scores will only demoralise the school and the players involved in thrashings.

“The image of the school will be affected and the players and parents will be demoralised,” he said in response to queries by The Monitor.

He added that the consequence of such scores will also inevitably lead to the possibility of the school pulling out or stopping all future involvement in the tournament.

“There is a possibility that principal will have doubts and will not put up a team the following year,” he added.

Yakob, a former international who played for Singapore at the 1984 Asian Cup which was held in Singapore, suggests that schools play in Zonals before being cast into groups with other teams across the country.

He also suggested that the Singapore Schools Sports Council adopts a league system with two tiers – with the top their involving teams from the likes of the Singapore Sports School and other schools which traditionally have a strong football history.