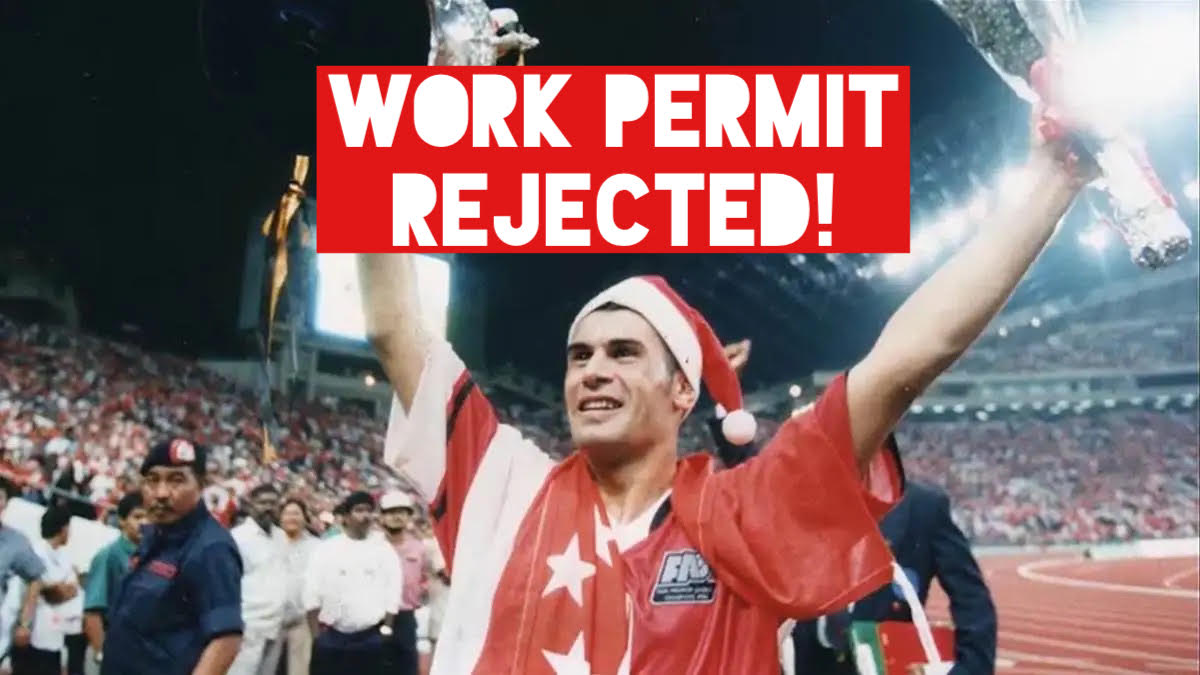 Even though his ban from football have both been rescinded both globally and in Singapore, former Malaysia Cup star Abbas Saad is still being punished for his 1995 conviction in a Singapore court.

According to sources close to TMSG, Abbas’ application for a permit to be gainfully employed has been rejected – twice.

The application for the employment pass was made by Geylang International, who was keen to have him on their payroll, possibly in charge of youth development.

It is understood that his application to work in Singapore was rejected because of his adverse record.

Abbas, who is an Australian, is currently in Singapore completing his Pro Licence coaching course and has been assigned to Geylang International to assist head coach Mohd Noor Ali in the dugout as part of his training.

Noor Ali confirmed that Abbas’ application for the permit has been rejected when contacted, but did not give any further details.

TMSG also understands that an appeal has been filed on his behalf, with the support of the Football Association of Singapore (FAS) and various other parties, including lawyer Edmond Pereira, who was also Abbas’ counsel in 1995 when Abbas was charged in court for conspiring with former team-mate Michal Vana.

Abbas has always reiterated that he was unaware that Vana was betting on his own matches, a point which Vana himself confirmed in a video interview.

In a documentary posted in 2016, Vana said that he was upset that he got “his friend” Abbas involved, even though the latter had nothing to do with Vana betting on his match. Watch from 42.:30m onwards.

Abbas stayed behind to face the courts in an attempt to clear his name after being charged, but Vana fled the country and did not answer his charges.

He was fined $50,000 by District Judge Khoo Oon Soo, who said that a mitigating factor in his sentencing was that Abbas had not taken any money from Vana, for scoring goals to win matches for Singapore that year.

As a result of his conviction, Abbas was banned from football internationally.

His global ban was lifted a year later in 1996 and he went on to play for Sydney Olympic and Sydney United, and was even called up to the Australian national team in 1998 under Terry Venables in a match against South Korea.

Abbas wore the number 21 jersey in that match, and Australia won with the solitary goal being scored by Ernie Tapai, who ended up in Home United the following year.

Abbas’ name remained on FAS’ list of banned players from 1995 all the way till 2009, when it was lifted by former FAS President Ho Peng Kee, in one of his last acts as President of the FAS.

In his book, ’My Journey in Politics’, Ho said, “By the time of the 2009 AGM (Annual General Meeting), I was convinced that, examining all the circumstances of the case, it was indeed the right thing to do.

“I was prepared to respond to any unhappiness that may surface as what some may see as FAS’ softening on corruption.”

Two months after his ban was lifted, Abbas was back in Singapore to complete his Asian Football Confederation ‘A’ licence coaching course.

In addition, he began appearing in the studios of ESPN Star Sports among others, with punditry duties and has also appeared in Malaysia’s Astro SuperSport after 2011 as part of their FourFourTwo programme.

A source close to Abbas told TMSG that Abbas is hoping that his appeal will be successful.

“All he wants is to contribute to football in Singapore. For how long does someone need to be punished? All his life?” said the source, who is a close friend of the former striker.

“He has been talking constantly about contributing to the Unleash the Roar project, to help Singapore football and it is disappointing that he has to go through this,” added the source.

In a recent interview with the Straits Times, Abbas said that “Singaporeans have treated me like one of their own.”

Someone obviously has not received the memo.

Should Abbas Saad be given a chance to work in Singapore? Have a story for us? Connect with us at hello@themonitor.sg