Reagan and Lynette feted at SNAG. 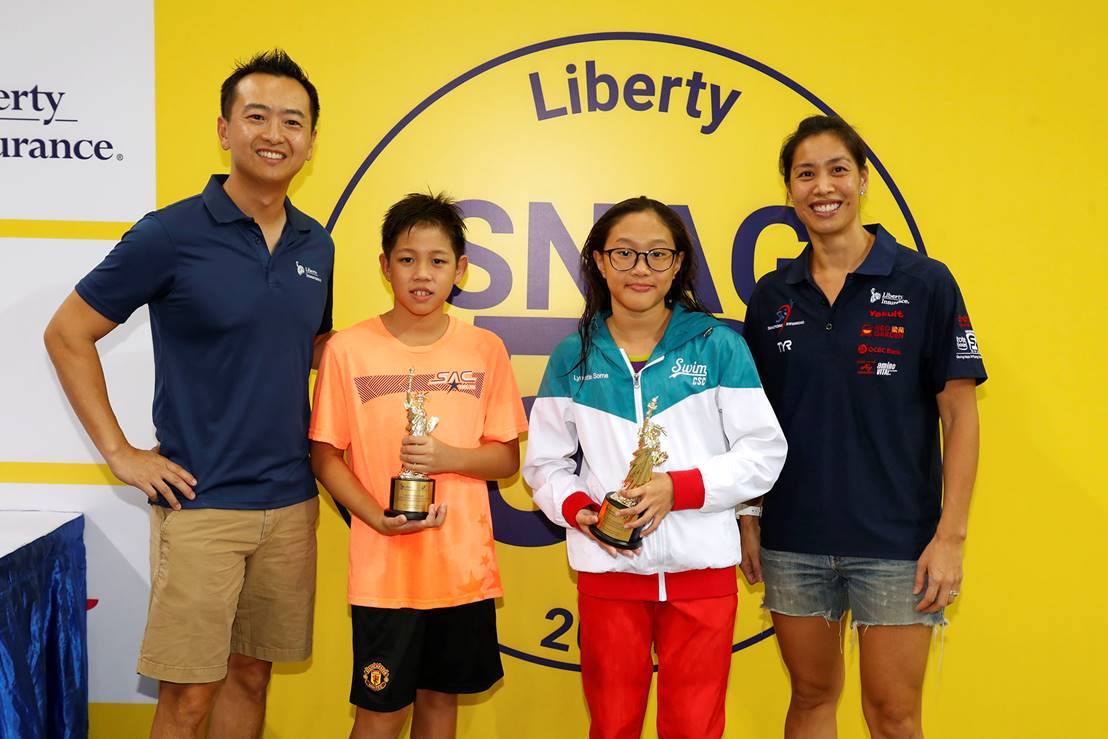 Reagan, the 2017 MVP, clinched his second title in 3 years after winning 9 out of the 13 events that he swam in.

“I am happy to have won the title. Throughout the competition, I just swam my best and it was not until the last event today that I knew I was nearly there. It is a good feeling and I think I met the expectations that my coach set out for me. Despite this, I think there are some aspects that I can improve on, such as my starts can be better and faster,” said Reagan.

For Lynette, 12, it was her first MVP title and her coach, Lim Zhicong, was delighted with her overall performance.

Speaking after the presentation ceremony, he said, “I think she did an almost perfect competition, she worked very hard, and showed maturity beyond her years to perform at her level. I am really happy and really proud of her, and this win is all down to her hard work and attitude towards training.”

The junior swimmers also kept up their record-breaking streak, with Jayven Teo setting a total of 4 meet records, out of the 9 meet records that fell on the final day.

The 8-year-old from Chinese Swimming Club (CSC) snagged his third meet record of the competition when he broke Singapore Swimming Club’s (SSC) Russel Pang’s record of 40:09 set last year in the Boys 50m Backstroke for 8-year-olds. He clocked a time of 39.38s to finish as the top swimmer in his age group.

Not letting up, he made it 5 meet records in 3 days in the afternoon when he finished first in the Boys 100m Backstroke, taking home the gold in 1:24.78s.

His fourth record of the day, and sixth overall, came in the final individual event of the competition, the Boys 50m Breaststroke, when he emerged victorious with a record breaking time of 43.14s, eclipsing Marcus Choo’s time of 46.39s set in 2015.

Having seen two of his records for 8-year-olds broken, Russel then duly replied with a record of his own, when he rewrote the 7-year record of 37.21s set by Zachary Ian Tan in 2012 with a new time of 36.28s in the Boys 50m Backstroke for 9-year-olds.

He also set a new meet record in the Boys 200m Individual Medley on Saturday, thus taking his overall tally to 5.

“I am very happy with her swim today and very delighted for her to have broken the meet record. She had a good swim yesterday in the 100m Breaststroke, so today for the 200m, I told her to focus on her race and her technique, do her personal best for the first 100m and then she can then push on for the next 100m. We knew she had a slight chance of meeting the record, so for her to achieve a new record, I am very happy”, said Vivienne’s coach, Li Fei.

This year, being the 50th edition of the Singapore National Age Group Swimming Championships, SSA introduced an inaugural SSA Club Challenge Cup given out to the SSA affiliate at the Juniors programme based on the total amount of points scored by the local swimmers in their respective age group, and Chinese Swimming Club were the recipients of the cup.

The Liberty Insurance 50th Singapore National Age Group Swimming Championships resumes on Tuesday, 19th March, at the OCBC Aquatic Centre when the senior swimmers take centerstage. With the SNAG being a qualifying meet for the upcoming FINA World Championships in Gwangju, the SEA Games in Philippines and next year’s Tokyo Olympics, the national swimmers will be gunning for qualification and sealing their respective spots in the aforementioned games.