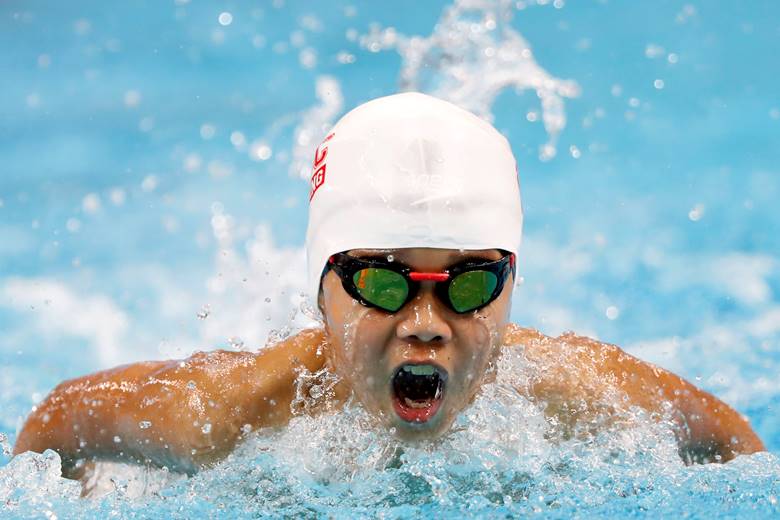 Jinson Wang of Aquatic Performance Swim Club (APSC) was the star of the pool on Saturday, as the 9-year-old claimed another two meet records to take his overall tally to 3 at the Liberty Insurance 50th Singapore National Age Group Swimming Championships (SNAG) at the OCBC Aquatic Centre.

Having won the 50m Freestyle on Friday in record-breaking fashion, he followed up with a dominant performance in the Boys 200m freestyle in the morning session, clocking a time of 2:21.25s, beating the record set by 2017 Most Valuable Swimmer, Reagan Cheng of Chinese Swimming Club (CSC).

Following the short break, he carried on where he left off in the first event of the afternoon in the Boys 200m Individual Medley.

He held off the challenge of CSC’s Lawrence Lim Zhe Quan to touch home first with a time of 2:43.39s and setting a new record in the process. His time was better than the 2017 time of 2:44.18s, also set by Reagan.

Speaking after the race, his coach, Qi Min Jie, was delighted with his charge’s performance. “Jinson is very hardworking during training, and he has the full support from his parents. I was expecting him to swim a timing close to the meet record, and so I am very surprised that he broke the meet record. I am very happy with his swims today.”

CSC’s Lawrence, who finished second to Jinson in yesterday’s 50m Freestyle and today’s 200m Freestyle and 200m Individual Medley, was not to be denied his glory in the pool though, as he put one over Jinson in the Boys 50m Butterfly, finishing first with a time of 32.96s, a new meet record. Jinson finished 3rd with a time of 34.35s. Lawrence’s time bettered Zachary Ian Tan’s 7 year record of 33.51s.

The victory gave Lawrence his second meet record of the competition, after he had clinched the 100m Butterfly on Friday.

In the 4 x 50m relays for 8-10-year old’s, CSC took home the gold in the boys event, setting a new record time of 2:04.19s. The team comprising of Liam Zachariah Goh, Ethan Yeo, Jeroy Teo and Tedd Chan led from start to finish ahead of APSC and Swimfast Aquatic Club (SAC) who finished second and third respectively.

The old record had stood at 2:08.70s courtesy of APSC in last year’s event.

It was also a record-breaking swim for the quartet from SAC in the girls race, as Joelle Tan, Lauren Ho, Sarah Marie Ting and Rianne Sim clocked a time of 2:14.71s to beat last year’s mark of 2:19.77s set by Singapore Swimming Club (SSC). Hungarian club Keszthelyi Kiscapak took home the silver, while SSC finished in third place.