Mighty May Ooi wins. Pleads for support for Singaporean fighters. 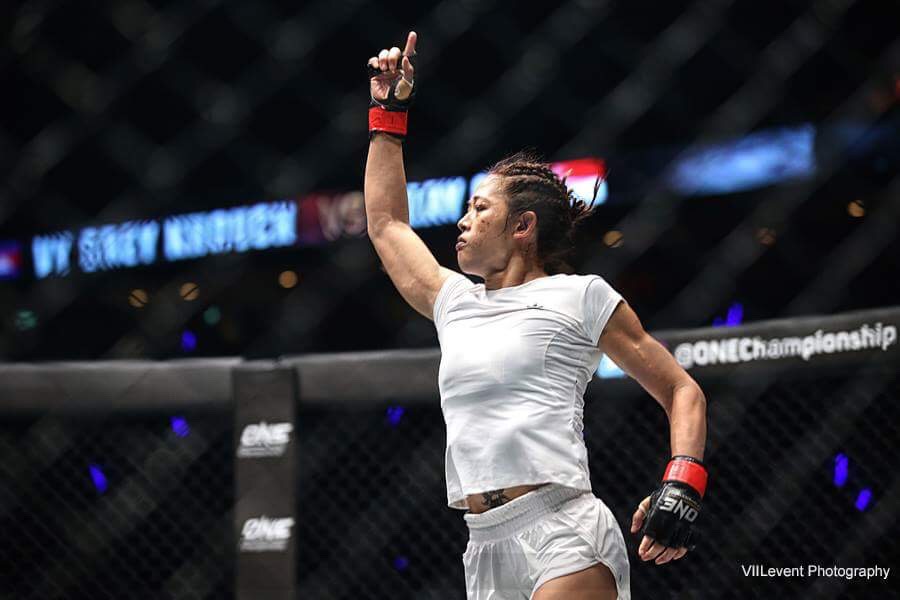 Singapore’s 42-year-old “Mighty” May Ooi won her straw weight bout against Cambodia’s Vy Srey Khouch on 24 November 2017 in a One Championship bout at the Singapore Indoor Stadium after a rear naked chokehold in the first round, and may have taken a dig at Angela Lee immediately after.

In comments made after her bout, she urged fans to support “homegrown talents” and said that there are many Singaporean fighter who are able to make the big stage.

She said: “There are many homegrown Singaporean fighters who are good enough to make the big stage.

“We have many fighters who are hungry and tonight both Tiffany Teo and myself have also proven that we can hold our own. Stay with us, as we take this journey together to the top.”

Angela Lee, who fights under the Singapore flag for One Championship, is not a Singaporean citizen and lives in Hawaii. She has also represented the United States in previous bouts.

Looking physically sharper and toned that the Cambodian, the fight started very tentatively as both fighters danced around the cage for the first minute.

But once May had Vy on the mat, there was no turning back as she notched her second consecutive win after her victory over Malaysian Ann Osman in August.

It was a great night for Singaporean fighters at the Singapore Indoor Stadium as Tiffany Teo and Amir Khan also won their respective bouts.

Ooi, also a Board member of the Chiam See Tong Sports Foundation, said that she hopes to earn herself a title fight before the end of 2018.

She is also aiming to qualify for the Asian Games 2018 in Jakarta to represent Singapore in jiu-jitsu.