Their long walk to freedom. 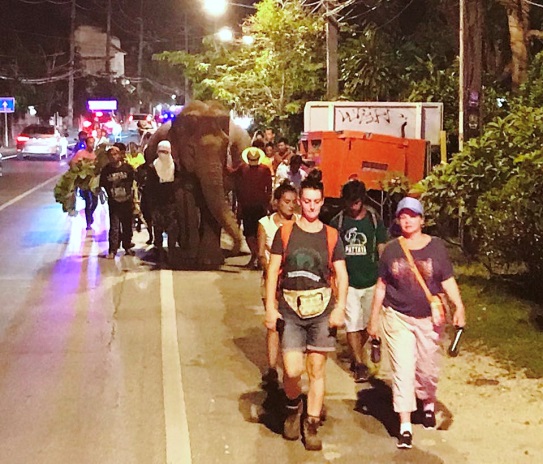 Relief and joy were palpable as two rescued Asian elephants—one unwell and one due to give birth within four months – arrived safely on Sunday to Samui Elephant Haven, an ethical elephant sanctuary located in southern Thailand.

Following their nine-hour, 20 km walk to freedom, 50-year-old Sri Nuan and 30-year-old Somboon join the more than 200 elephantsthat have been rescued through efforts of the non-profit Save Elephant Foundation and its Asian Elephant Projects arm, which is dedicated to helping small, independent elephant tourism operators transition to ethical and sustainable programs.

Their rescue was in stark contrast to the heart-breaking story of three-year-old “Dumbo”, whose tragic death made headlines around the world the very same weekend. The baby elephant, who was forced to perform daily for tourists at Phuket Zoo, was so weak that his back legs snapped. He died a week later according to Moving Animals, who had launched a viral campaignto free the emaciated elephant last month.

In Thailand, there are less than 4,000 captive working Asian elephants and around 1,000 living in the wild. Most captive elephants in Thailand are involved in elephant tourism. For over two decades, Chailert has been leading the movement toward the ethical treatment of elephants in Asia and ethical elephant tourism. Samui Elephant Haven is one of 40 “Saddle Off” projects supported by Save Elephant Foundation.

“I would like to thank everyone who helped us bring these girls to freedom,” said Chailert.

“It was beautiful to see so many local people, tourists and expats joining us on the walk to their new home. It gave me hope to see the love expressed for the elephants. We need people to support projects such as Samui Elephant Haven so we can rescue more elephants and give them the life they deserve.”

Escorted by police, Sri Nuan and Somboon walked overnight along Samui’s ring road from a riding camp through Lamai, Chaweng and Bophut, with dozens of supporters joining the caravan and local food stalls along the route giving bananas, pineapples, watermelons and coconuts to the gentle giants.

The elephants were walked because of Somboon’s pregnancy and concern over the distress Sri Nuan would experience riding in a truck for the first time in more than 20 years.

Upon their arrival at Samui Elephant Haven, the two elephants were greeted enthusiastically by the sanctuary’s other elephants, including Somboon’s seven-year-old daughter Nong Pech.

“Nothing can quite compare with the compelling moment when mum and daughter were reunited at 3am today after the baby had been stolen from her when she was just two years old.  It’s been five years since she saw her mum, but there was no mistaking the instant recognition and sheer joy that both elephants demonstrated during their touching reunion,” said Susan Field, one of the supporters who joined the elephants’ walk to freedom.

Somboon’s unborn baby will never experience the torture she underwent, and after working in captivity their entire lives, Somboon and Sri Nuan will enjoy a life of leisure, living in nature with peace and dignity.

“It has been my dream since I was 10 years old to give elephants their freedom. Last night gave me hope because so many people want to help and support us,” said Samui Elephant Haven Founder Suriya Salangam, whose family has worked with elephants for over 200 years.

“Somboon and Sri Nuan will have a better life now. I am grateful to have the opportunity to take care of them and all the elephants in our sanctuary and will work to free more so they can live a better life.”

Artist shows what it looks like if it snows in Singapore. It’s cool.