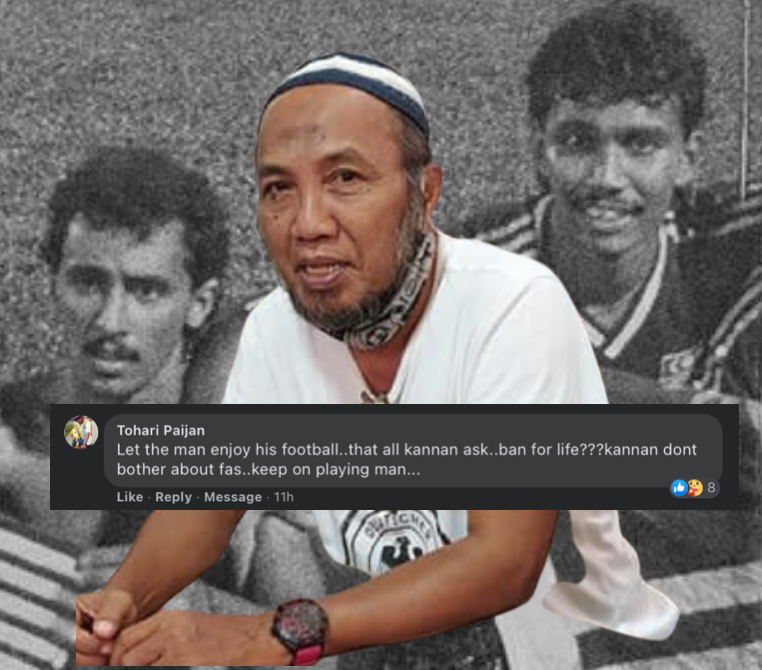 Tohari left a comment on a Facebook post by Jose Raymond posted on 24 August, and had two messages – one seemingly for the Football Association of Singapore and the other for Kannan.

Directed at the FAS, Tohari who won the Singapore Cup and FA Cup in 1998 with Tanjong Pagar United said, “Let the man enjoy his football. That all Kannan ask.”

And then pointing to Kannan, he offers Kannan some advice and said, “Ban for life??? Kannan don’t bother about FAS. Keep on playing man.”

Former international Kannan has appealed to the FAS through lawyers Eugene Thuraisingam LLP to have his life ban lifted, a ban which has been in place since 1995.

News of Kannan seeking to have his life ban lifted first hit the headlines on 17 August, following a Facebook post by former journalist Jose.

The bone of contention, apart from the fact that there has not been a review of Kannan’s life ban for more than 25 years, is also that the FAS had warned Kannan about being involved in social football at the Indian Association, which is not an affiliate.

The FAS, in its response to the online sentiment and media queries following the Facebook post, confirms their position.

Said Jose in his latest Facebook post on the matter, “Activities at the IA are not activities of the FAS, and it’s legal reach does not cover social and private clubs which are not affiliated.

“The FAS are not Lords of All Football Activities in Singapore.

“Based on its very own Constitution, permanent suspension from “football management, membership, or the activities of the FAS” does not bar Kannan from playing and assisting in football related events in IA, as it is NOT an affiliate of the FAS.”

It was also revealed that despite emails from the IA football convenor Ranjit Singh and the President of the IA Vishnu Pillai, the FAS have not provided a response to Ranjit for almost a year and also not responded to Vishnu for almost eight months now.

The FAS has said in its statement that Kannan’s appeal to have his life ban lifted is currently undergoing due process.

Among the former players who have supported Kannan’s appeal to have his life ban lifted are Malek Awab (left, main photo), E Manimohan and Jai Prakash.