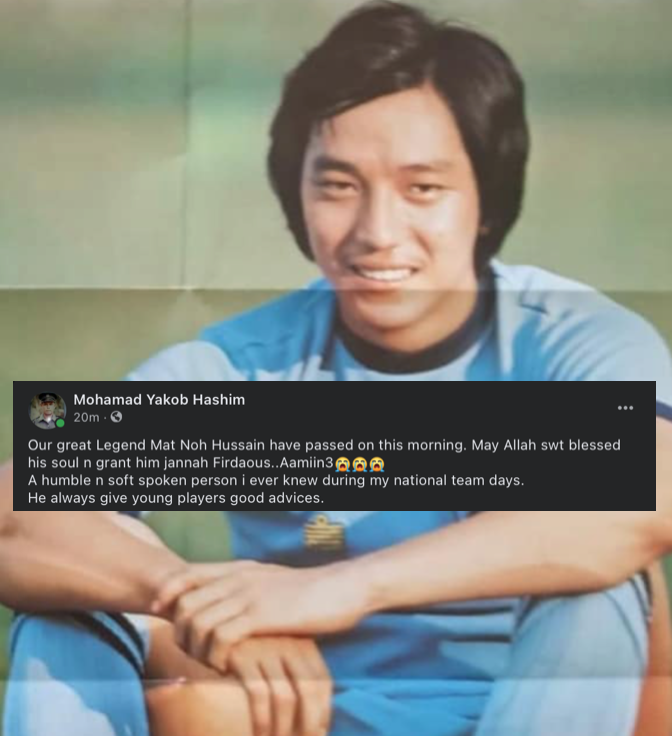 The information was confirmed by former national goalkeeper Yakob Hashim in a Facebook post early on 20 September.

On 18 September, Mat Noh suffered a heart attack and was warded in the intensive care unit at the Sengkang General Hospital.

Friends had begun sharing messages on Whatsapp from 18 September onwards and on Facebook about the midfielder’s condition, and sought prayers for his recovery.

A few, like Lim who played alongside Mat Noh in the 1970s until 1980, had also posted photos of them together.

Mat Noh (photo below, back row, fifth from left)was a member of Singapore’s 1977 Malaysia Cup winning side alongside the likes of Quah Kim Song, S Rajagopal, Samad Allapitchay and Edmund Wee, among the other luminaries.

Football fans and even former players have begun posting their tributes to the midfielder.

The Football Association of Singapore also posted a condolence message on its Facebook page.

So did project director for Unleash The Roar, Ben Tan.

Ardent football fan Christopher Wong said in a Facebook post that “Mohamed Noh will forever be remembered for his winning goal from the penalty spot in the Pre-World Cup thriller against the star-studded Malaysian team in 1977 in front of my Dad & me & 59,998 Kallang faithful.”

“Cool, calm & stylish, he consistently embarrassed  defenders with his delightful body feints down the wing.

“Off the field, his good looks made him the heart-throb of many a female fan.

“Mat Noh….thank you for your service to Singapore Soccer.”