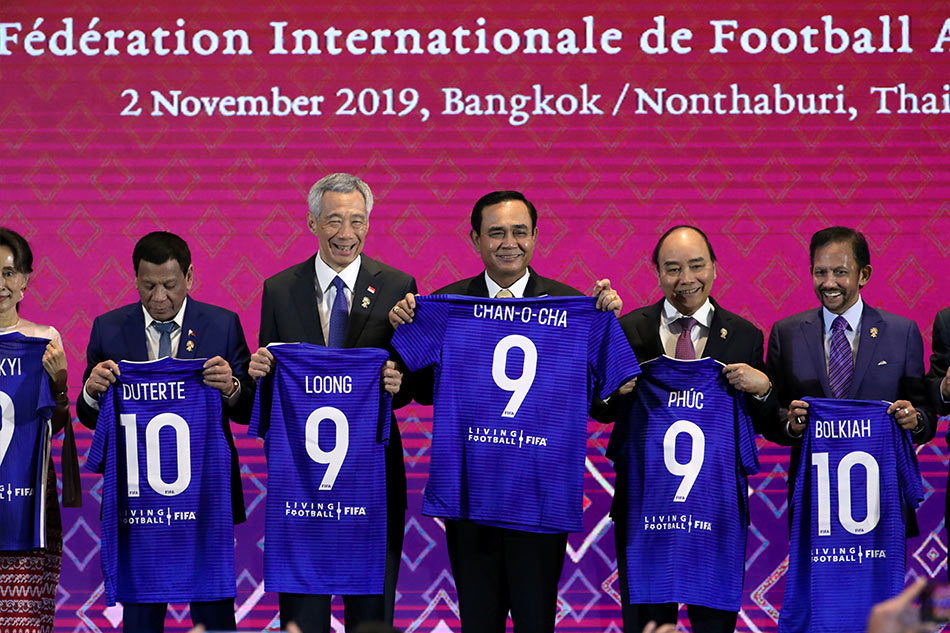 In 2019, Thai Prime Minister Prayut Chan-O-Cha stated ten ASEAN nations will be bidding for the 2034 World Cup, during the ASEAN leaders conference in Bangkok.

It was a bold decision which raised eyebrows and decibels around the region, and the world.

FIFA president Gianni Infantino endorsed the move at the time, noting that ASEAN had the “economic and football capacity” to host the World Cup.

Infantino alluded to ASEAN’s 650 million population, growing economy and passion for football, saying that it was a great platform to show the world what the region can do.

At the 18th ASEAN Summit, where the presidents of the 10 countries endorsed the proposal to apply for the 2030 World Cup, the notion of having ASEAN host the World Cup was first raised in 2011.

The plan was firmly established eight years later at the same summit, and Cambodian Prime Minister Hun Sen reinforced it in June of this year when he said that as ASEAN Chair, he would like all leaders of state and government to support the initiative.

However, because Qatar will host the tournament in 2022, ASEAN will be unable to host the 2030 World Cup because FIFA regulations prohibit staging the event in Asia so soon after it was relocated to this area.

The following opportunity for ASEAN to submit a bid is for the 2034 edition.

As the most popular sport in ASEAN, football, hosting the World Cup would have a tremendously positive effect on the country’s economy and sporting events.

To put things in context, the Asian Football Confederation (AFC) Asian Cup was co-hosted by Malaysia, Thailand, Vietnam, and Indonesia in 2007, at which Iraq lifted the trophy in Jakarta.

These provide even additional justifications for why ASEAN would be qualified to host such a prestigious event.

As one of the ASEAN nations with history in the region, Malaysia is one of those that could host the world cup if it materialises.

Malaysia has a well-established football league structure called the Malaysian Super League, and the authorities have the credentials to oversee major football competitions.

In addition, according to the most current press reports, Shah Alam Stadium (photo below) would be renovated and have a seating capacity of 60,000–70,000 people.

By the time the stadium is finished, which is estimated to be in 2026, there will be more parking spaces available that will be beneficial to many people all over the world as well as the lodgings that will be built next to the stadium.

This calls for modernised infrastructure, cutting-edge amenities, and increased security, which is yet another reason why Malaysia should be the ASEAN country to host the World Cup.

THE IM{PACT OF HAVING THE WORLD CUP IN ASEAN

The ASEAN community’s principles of economic, cultural, educational, and sporting cooperation will need nations to put aside their differences and work together.

The inter-relationships between member nations, which take use of the economic power of the world as a whole, would bolster a combined bid and make up for any weaknesses from a possible World Cup host country.

Additionally, ASEAN is a tourist hub.

From the vibrant cities of Singapore, Kuala Lumpur, and Ho Chi Minh to the beaches of Bali and Cebu and the historic temples of Cambodia and Myanmar, there is a wealth of attractions for tourists to see and do in the region where people truly want to visit.

The World Cup will bring in enormous amounts of tourism revenue, which will improve the standard of living for many ASEAN citizens.

THE CHALLENGES OF HOSTING THE WORLD CUP IN ASEAN

All 10 countries have different political systems and political climates, and from now till 2034, multiple elections will take place with constant changes in policies every time a new government is in power, which FIFA will need to deal with.

Another challenge that could potentially have a greater effect on ASEAN countries is the cost of establishing and maintaining tournament venues.

To put things in context, Qatar is said to have spent $200 billion on the World Cup this year.

Today, the most expensive stadium, Mane Garrincha, which cost US$550 million, is used as a bus parking lot.

Now taxpayers have to cover the maintenance costs of the new stadiums.

ASEAN would then have to unite to make investments in the hopes that the revenue raised will more than cover the costs incurred in World Cup preparations.

A stadium must be able to accommodate 40,000 spectators or more in order to host a FIFA World Cup game.

Malaysia has a competitive edge over the rest of the region in this area.

There will be no problems meeting the FIFA requirements because the country has stadiums with capacities of over 80,000 people, including Bukit Jalil Stadium (photo below) and Shah Alam in Kuala Lumpur and Selangor, respectively.

The security measures are another important element that need proper monitoring.

Security and crowd control would need to be improved along with infrastructure barriers in order to prevent a recurrence of horrible occurrences, for instance, in Indonesia when more than 125 people were killed after supporters stormed the stadium during a league match in October.

If the World Cup is to be held in ASEAN, the fans must show restraint, and security measures must be strengthened.

More importantly on the field, which country or countries will represent ASEAN at the World Cup?

Historically, the hosting nation or nations of football’s showpiece event automatically qualify for the World Cup.

Does this mean that all ten ASEAN countries will automatically qualify for the 2034 World Cup?

Even though FIFA has expanded the number of teams participating, this surely will not and cannot happen?

A unified ASEAN team made up of the best ASEAN athletes would be the best course of action, much like the Great Britain team did when London hosted the 2012 Olympics.

However, this raises questions about who should be on the committee that selects these athletes as well as how and who should be selected.

If a team is selected from among all of the member nations, ASEAN can participate in the competition as a single unit.

Hosting the 2034 FIFA World Cup in ASEAN is feasible.

But even so, it’s not a dream we should let go so lightly.

This op-ed was penned by Datuk Seri Vijay Eswaran, Founder and Executive Chairman of QI Group.