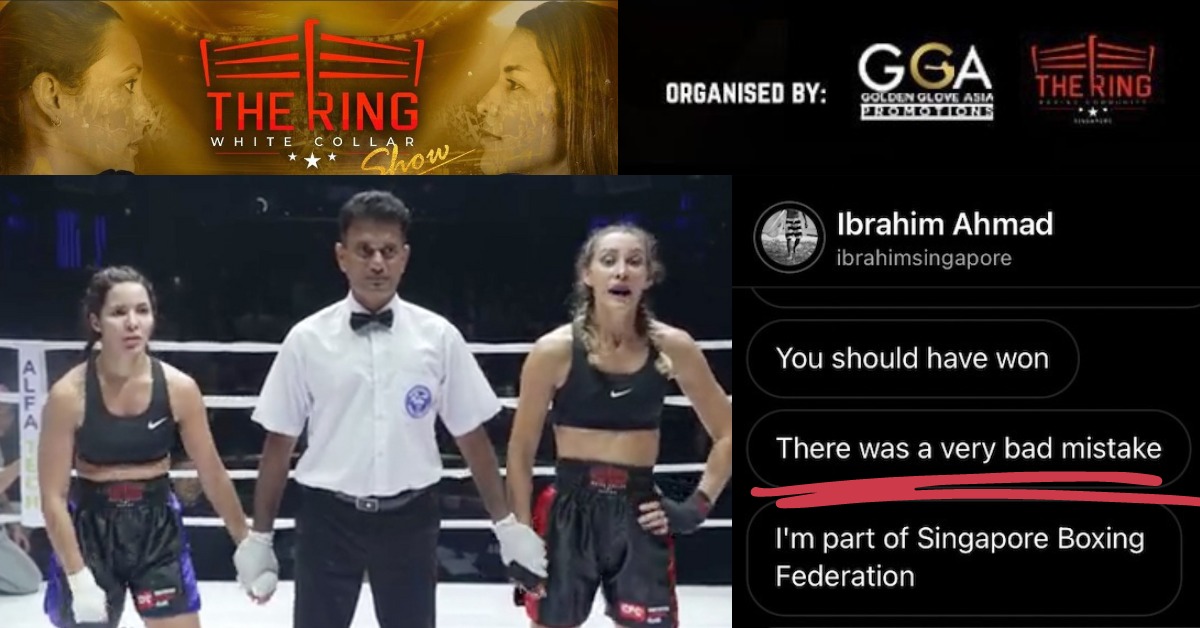 A female boxer representing Evolve MMA has accused an event organiser of unfair and questionable judging and also took to social media to air her emotions after The Ring White Collar Boxing event which took place on 24 November at Marquee.

According to the event banner, the event was organised by Golden Glove Asia Promotions and The Ring Boxing Community, an affiliate of the Singapore Boxing Federation (SBF).

A check on the ACRA website on 30 November shows that Golden Glove Asia Promotions has been struck off.

The boxer – Lisa Bechina – took part in the women’s featherweight event and came up against Natasha Cullen.

Bechina, a Web3 specialist who has a startup in Singapore told TMSG that she was flabbergasted and wanted to expose the organisers for their unethical behaviour.

“Unfortunately, it was very obvious who the real winner was.

“The feedback from the audience who were there and who watched online were also unanimous.

“I just want the sporting and boxing fraternity to know what goes on at these events, which is unethical and wrong.”

A video of the fight showed that Bechina was the more aggressive of the two fighters and was pulverising her opponent with punches from all corners.

Watch video from about 1:00.00 onwards or cut to the fight in the version below.

In all rounds, she was ostensibly the clear winner.

The commentators said it was a “shocking decision”

Even Cullen appeared shocked as the announcement was made.

This was also the general consensus of fans who commented on social media.

Danial is also a trainer at Evolve, a gym where Bechina trains at.

In addition, an executive committee member of the SBF also reached out to Bechina on her Instagram and said that Bechina “should have won”.

He is identified as the assistant honorary secretary of the SBF Ibrahim Ahmad.

He said that he had “informed the guys about it”.

Bechina also posted a short video on Instagram, and called out the organisers for their unprofessional behaviour.

She also called out the organisers in a series of Insta stories thereafter, many of which were taken down thereafter.

There was also a WhatsApp exchange which indicated that the judges felt that the result was a mistake but could not correct it, if it was truly a mistake.

Bechina also shared WhatsApp messages with TMSG which clearly showed that the organisers were asking that the fighters sell tables or seats to the event.

RESPONSE FROM THE RING

TMSG reached out to The Ring through the email on their website and in response, Christian Corrigan, said that as the event organiser, “we are not qualified to officiate, judge, score or referee boxing matches.”

Corrigan leads partnerships at The Ring and said that he was responsible for project managing the event that evening.

He added that there were 13 fights in total during the event – 11 amateur “White Collar Boxing” fights, which were governed and officiated by the Singapore Boxing Federation (SBF) under Amateur rules.

“Two professional fights were governed and sanctioned by the World Boxing Organisation (WBO).

“As the event organizer, we are not qualified to officiate, judge, score, or referee boxing matches and this is left to the officials (SBF and WBO).

“As spectators or participants, we may not always agree with the results, but we respect the professionalism and final decisions of the SBF as the governing body for these amateur matches.”

He also added that it was normal and “an accepted business model” for White Collar Boxing participants to sell tables or seats for the events.

“This is clearly communicated to all participants at the beginning and is not a secret.

“Participants agree to “co-promote” the event because they understand they are part of a significant boxing experience that is difficult to achieve alone.

“Participants that do not want to co-promote the event through ticket sales are not forced to participate.

“All participants agree to fight on their own accord under the amateur rules governed and officiated by the Singapore Boxing Federation.”

WHAT THE SINGAPORE BOXING FEDERATION SAID

TMSG also spoke to newly elected SBF President Faisal Hussain on the phone, who asked that we submit queries via email.

The SBF has since indicated that they will not be responding to any queries.