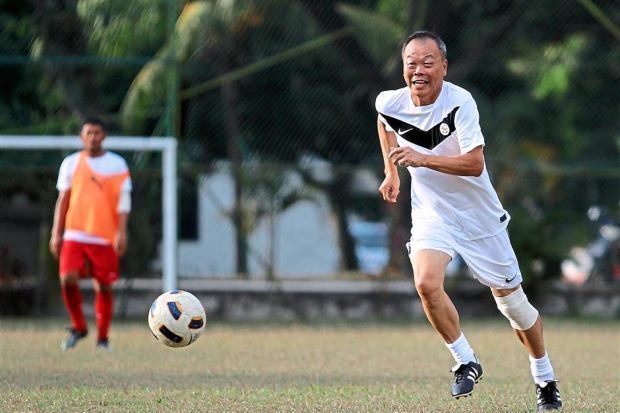 The 71-year-old was one of the four national legends including Zainal Abidin Hassan, the late Datuk M. Chandran and Datuk Santokh Singh inducted into FIFA Century Club in its latest August updates on Tuesday.

Older Singaporean football fans will recognise him as the last man from Selangor who always gave players like Quah Kim Song, Fandi Ahmad and many others during his era a hard time at getting past his backline.

The FIFA Century Club is exclusive for players who have played 100 international matches and above.

Soh, also known as the Towkay, represented Malaysia from 1969 to 1984, and is placed first in the illustrious list with 195 caps to his name.

His made his debut in a match against Thailand on 19 November 1969 and played his last match for Malaysia on 18 October 1984 in a clash against Yemen.

He has 10 more than second-placed Kuwaiti Bader Almotawaa.

Ronaldo remains the only player who has a shot at cracking Soh’s record as he’s still actively representing Portugal in international football.

Zainal, Chandran and Santokh have collected 116, 115 and 100 caps respectively.

With the four latest additions, Malaysia are now represented by seven players in the list.

Datuk Abdul Shukor Salleh (163), the late Datuk Mokhtar Dahari (138) and the late Datuk R. Arumugam (131) were the first three who made the list based in May.

Although Soh’s overall appearance was recorded by Football Association of Malaysia (FAM) as 252 caps, only 195 of them counted as A category matches.

Soh served as the national captain from 1975 until his retirement in 1984.

“Although FAM records show that I’ve played for the country on 252 occasions, I believe it includes all friendly matches against foreign clubs as well as competitions held outside FIFA auspices.

“To be recognised as the most capped international ever is the highest accolade one can have,” he said.