Singapore, a sports city no more. 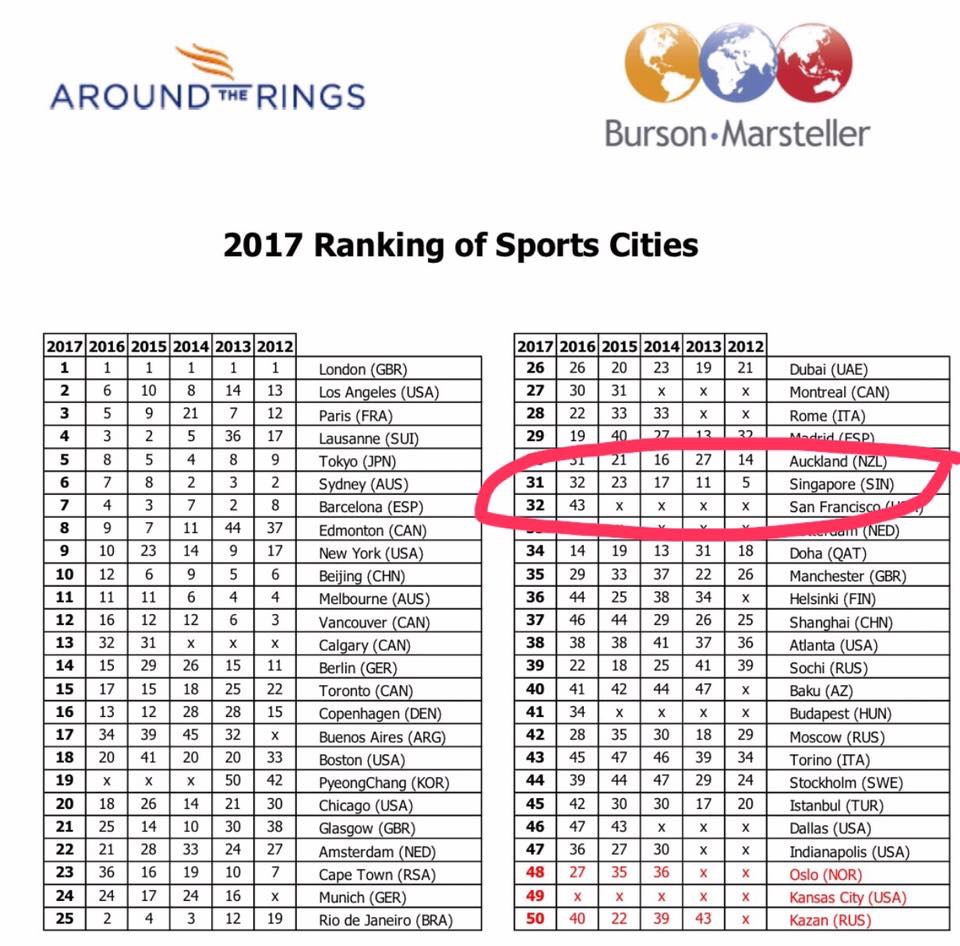 Singapore is no longer considered one of the world’s top sports cities and has slipped down so low in the world sports city rankings that it is nothing but a travesty.

According to the latest findings by Burson Marsteller Sport released in February this year, Singapore is currently languishing in 31st spot.

In 2010, Singapore was fifth in the world in the very same rankings, behind London, Melbourne, Sydney and Vancouver.

Burson Marsteller Sport’s ‘2017 Ranking of Sports City’ ranks the top 50 sports cities from around the world based on public perception of a city’s association with sport. London, Los Angeles and Paris are currently ranked in the top three.

The results are based on a public online vote coupled with an industry vote from a select group of top sport leaders drawn from international federations, national Olympic committees, sport media and other influencers in the world of sport. Submissions from sports leaders are weighted a lot ore heavier than those from the general public.

Apart from the Burson Marsteller report, Singapore was also named the best sports city in Asia in 2012 after finishing in sixth place at the biennial SportBusiness Ultimate Sports City Awards. In 2010, Singapore was second only to Melbourne in the very same awards programme.

All of these accolades were widely publicised in the past, and it is with little wonder why Singapore has been rather silent on this front over the last few years.

Even though the Lion City has been hosting events such as the BNP Paribas WTA Finals Singapore, the International Champions Cup (ICC) and the HSBC Singapore Rugby 7s, the question to ask would be how much are people willing to pay to watch these events?

And if the Government does not provide any kind of financial support for these events and even the Singapore Grand Prix through funding and other support by Singapore Tourism Board and Sport Singapore, would these events be able to build a sustainable and self-financing business model?

Also, has there been enough research and studies done to seek the reasons and indicators as to Singaporeans’ lack of appetite for sports events? In contrast, tickets for concerts are always selling out even though they can cost above $300 a ticket. Think Coldplay, Sam Smith, Madonna and Bruno Mars and many others.

But sports event organisers – including the organisers of the HSBC Singapore Rugby 7s, the ICC and the BNP Paribas WTA Finals Singapore seem to struggle with ticket sales.

Is it any wonder then that this will be the final year that the WTA Finals Singapore will grace our shores and that even the HSBC Singapore Rugby 7s is now a flight risk after the current hosting deal ends in 2019?

Perhaps the Government should seek inputs and advice from sports and entertainment industry experts of what can be done to boost these two sectors, to build a healthy ecosystem, which will then ultimately support the growth of businesses and new jobs in these sectors down the line.

Less control, more support, enhance enabling, and most importantly, be open to criticism and feedback and recognise that it doesn’t have all the answers.

And this is truly a travesty.