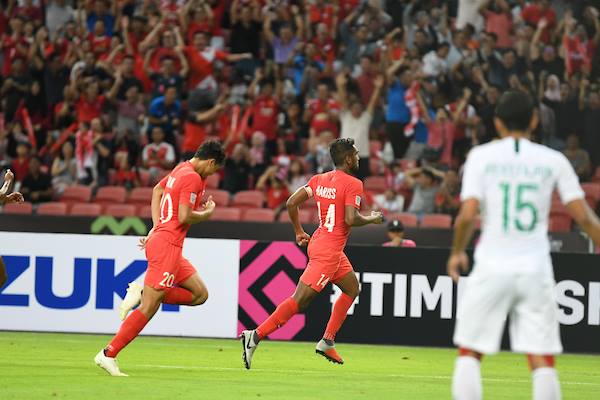 Hariss Harun’s goal for Singapore in the 37th minute of the AFF Suzuki Cup match against Indonesia on 9 November has lifted Singapore football fans.

One fan shared how it was a good sight  to see fans leaving the National Stadium smiling for once.

The last time Singapore picked up a win at the Suzuki Cup was four years ago when the Lions romped to a 4-2 win against Myanmar.

The Lions victory defied the odds and made minced meat of pre-match predictions that the Lions were underdogs.

In fact, Fandi Ahmad’s Lions showed a renewed vigour in attack and were unafraid to take the game to the Indonesians.

If not for the crossbar and some poor finishing, Singapore could have ended up easy winners on the night.

Said Fandi: “I think we have a strong mentality in the team now, they want to be together and they are fighting and motivating each other on the pitch,” he asserted.

“We always tell them we are not playing just for ourselves, but for Singapore football and the fans; they deserved the win today.”

The Lions will face Philippines away on Tuesday at 8pm.