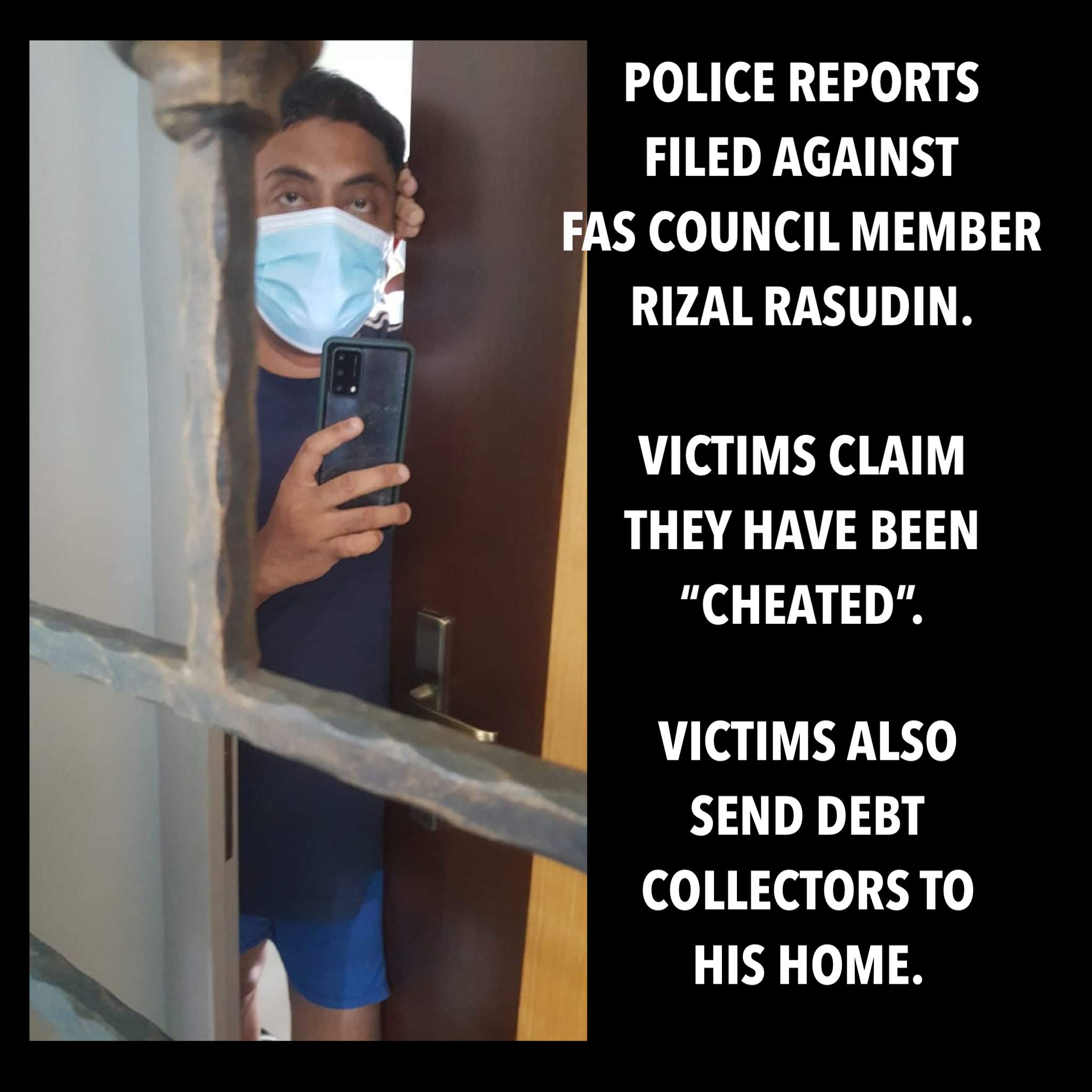 Multiple police reports have been filed and legal proceedings are being contemplated against current Football Association of Singapore (FAS) Council member Rizal Rasudin (photo below) for his role in what victims are referring to as alleged “cheating”.

The amount in question which multiple parties have apparently “lost” is allegedly more than $1 million, according to affected parties who spoke to TMSG on behalf of many of the victims.

Victims are still hoping to get their money back.

TMSG understands that a substantial number of people have been affected by the scheme which was signed off by Rizal in his position as Managing Director of a company which promised quick returns on a monthly basis under a “sales consignment contract”. (see photo below)

It is unsure how much of the “losses” faced by the complainants can be attributed due to Rizal’s actions in his time as the Managing Director of the company.

Rizal, in response to queries by TMSG, said he was no longer with the said company and declined any further comment and also asked that TMSG not publish this story as it would affect him and impact his family.

For his role in the alleged cheating, Rizal has been called in to assist the Commercial Affairs Department investigations. (see photo below)

It is also understood that one of the victims provided the Commercial Affairs Department with his statement in August 2022 just five months ago, suggesting that investigations are still ongoing.

In addition, TMSG also is in possession of a submission to the Attorney General’s Chambers (AGC) in June 2021 seeking its intervention into the matter.

Multiple police reports, including one filed by one of the victims against Rizal in July 2021 is also in TMSG’s possession for the purpose of this story.

In that particular report to the police, the victim told police that Rizal had warned them “not to make any police reports as it will complicate the repayment matters”. (see photo below)

The victim is said to be owed more than $300,000, including promised dividends from the investment, and had given about $200,000 of his and his family’s money in total.

One of the victims who spoke to TMSG said, “We are trying our best to inform everyone about what has happened and to prevent anyone else from going through what we did.

“We hope that the authorities do their best to help us recover our money and that these people face action for what they did to all of us.”

Another victim also shared how Rizal was careful to inform them that they should not be using the term investment, and should be saying that it was more of trading and they were putting their money into “sales consignments” as “co-traders”.

Getting Debt Collectors to claw back money

The debt collectors themselves had also posted details of their collection activities and had asked for more victims to come forward if they were keen to get their money back.

Over the last two years, several victims who have allegedly lost their savings have put up Facebook posts.

These posts are still online.

The FAS and Sembawang Town Council

One of the victims also sent an email to former FAS President Lim Kia Tong and FAS General Secretary Yazeen Buhari on 3 February 2022, informing him of the ongoing investigations into Rizal back then.

The complainant told TMSG that he did not receive a response from the FAS.

A complaint was also filed with the Sembawang Town Council (SBTC) given that Rizal is a member of the SBTC Finance Committee, and a grassroots leader in the district.

The complainant received a response from a Mr Ting Seng Kiong, saying that SBTC was looking into the concerns which had been raised but there were no further responses from SBTC thereafter.

At last check, Rizal is still part of the SBTC’s Finance committee, and is found on the official website, which suggests that no action has been taken for him to recuse himself from his role pending investigations.

Rizal is a recipient of the Pingat Bakti Masyarakat (Public Service Medal) and is also considered an active member of the Sembawang GRC grassroots.

Rizal has also not recused himself from any of his roles at the FAS pending the investigations into the allegations.

“We just want justice and hope that action is taken against everyone who have caused us so much of pain, distress and suffering,” said a victim who lost a substantial amount of money.

If you were a victim, we would like to hear from you. Write to us at hello@tmsg.sg or just drop us a DM on our socials.