Seeing red with ‘BU TO’. 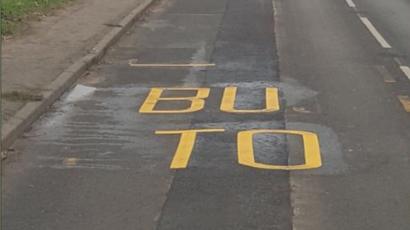 If you understand Malay, you would probably be laughing yourself silly if you live in Fordham in the United Kingdom now.

Residents in Fordham, Cambridgeshire have been left with incomplete road markings after recent works, reported BBC.

One of the markings shows just ‘BU TO’.

In Malay, this is a crude representation of the male human sex organ.

The markings were meant to be ‘BUS STOP’.

There was also a ‘LO’ instead of ‘SLOW’.

The UK Power Networks (UKPN) have said that they will fill in the blanks out of goodwill.

The UKPN told the BBC: “Contractors… have completed new cable work under various roads in Fordham and resurfaced where work had taken place.

“This included reinstating the letters and white lines. The remainder of the words and lines outside our work are always the county council’s responsibility.”

Singapore also had its fair share of fun with road markings when in 2017 contractors painted ‘NICOLL U’pass’ instead of Nicoll Underpass which led the marking being read as ‘NICOLL UP ASS’.