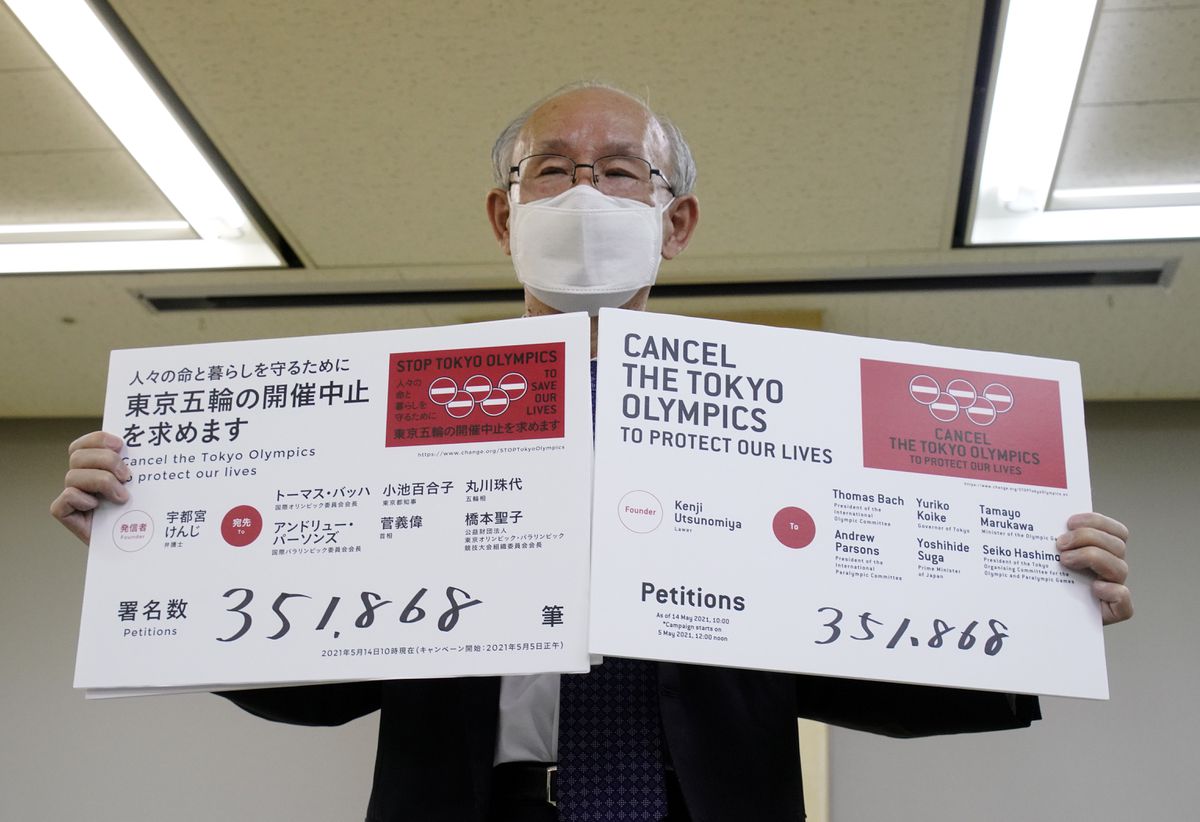 Critics of Japan’s plan to hold the Tokyo Olympics despite a fourth wave of coronavirus infections have submitted a petition on Friday signed by 350,000 people over nine days calling for the Games to be cancelled, Reuters reports.

“Stop Tokyo Olympics” campaign organiser Kenji Utsunomiya said the global festival of sport – already postponed from 2020 due to the coronavirus pandemic – should take place only when Japan can welcome visitors and athletes.

“We are not in that situation and therefore the Games should be cancelled,” he told a news conference.

“Precious medical resources would need to be diverted to the Olympics if it’s held.”

The petition was submitted to the Olympic and Paralympic committee chiefs as well as Tokyo Governor Yuriko Koike.

It came as Japan added three more areas to a state of emergency now covering Tokyo, Osaka and four other prefectures amid surging case numbers, exactly 10 weeks from the scheduled July 23 opening of the Games.

Asked about the campaign against the Games, Tokyo Governor Koike said she would work towards a “safe and secure” Olympics.

“Though there is a global pandemic, it is important to hold a safe and secure Tokyo 2020 Games,” she told a regular news conference.

The new areas under the state of emergency include Hokkaido prefecture, where the Olympic marathon will take place, after it reported a record high of 712 new coronavirus cases on Thursday.

Opposition to the Games has also come from doctors, while some high-profile Japanese athletes have expressed concern, including Masters golf champion Hideki Matsuyama and top women’s tennis player Naomi Osaka.

Business leader Masayoshi Son, chief of SoftBank Group Corp, added his voice to the chorus of trepidation on Thursday, saying in unusually blunt remarks he was afraid of what might happen if the Games went ahead.

Dozens of towns that had been due to host visiting athletes at pre-Games events have cancelled those plans, saying they could not guarantee medical help amid strains on the health system.

Economy Minister Yasutoshi Nishimura, asked whether the Games would go ahead despite the increase in COVID cases, said organisers were looking to the International Olympic Committee’s backing for the Games.

“I am aware that many are concerned that it will lead to an outbreak of cases,” Nishimura told parliament.

“The organisers are currently working together closely, based on the decision by the International Olympic Committee to hold the Tokyo 2020 Olympics,” he said.

Organisers are determined to host the Games with coronavirus mitigation measures in place.

A skateboarding event on Friday was the latest test for their precautions.

Organisers told reporters after the event that athletes and coaches had been told to follow measures and avoid the usual celebratory hugs and cheers on the sidelines.

“This kind of behaviour is not OK in terms of COVID-19 measures,” said Yasuo Mori, the deputy executive director of Tokyo 2020’s operations bureau.

“We’d usually take videos together but now we have to stay masked and two metres apart,” said skateboarder Ryuto Kikuta, 17, adding that he understood the measures were necessary but they still felt strange.

Spectators will not be allowed in from abroad, while a decision on Japanese-based spectors has yet to be made.

With the latest emergency measures, 19 out of Japan’s 47 prefectures fall under restrictions that include closures of eateries by 8 p.m. and a ban on alcohol at bars and restaurants.