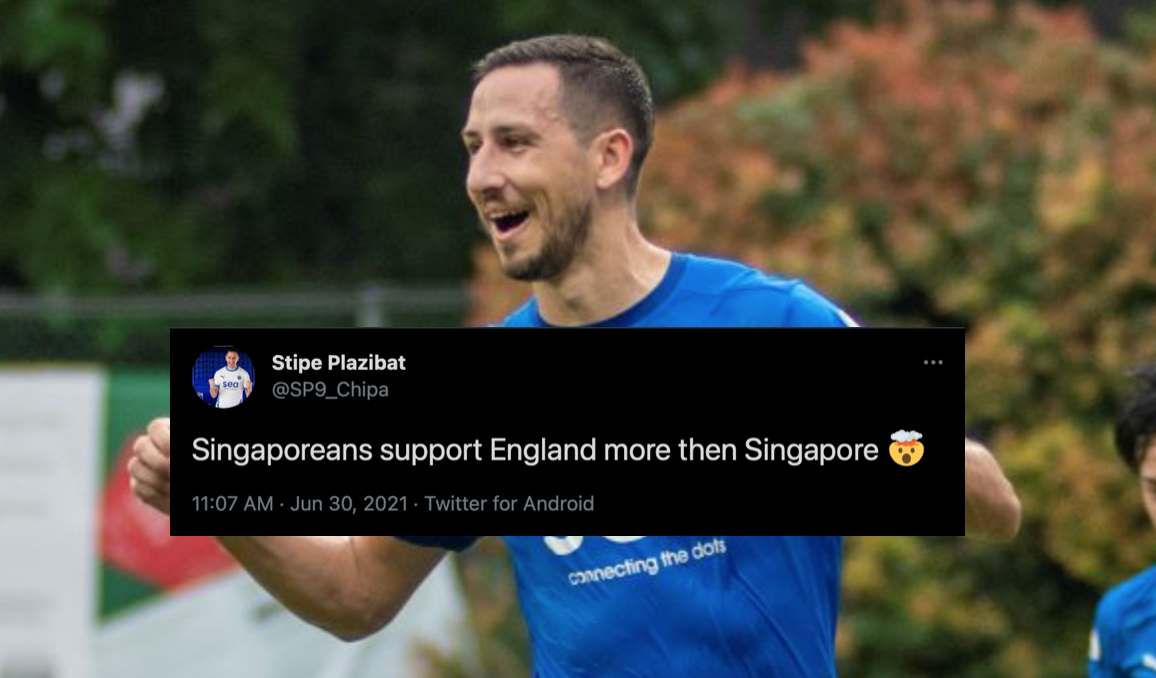 Depending on which side of the fence you sit on, Lion City Sailors’ forward Stipe Plazibat’s tweet earlier today would have struck a raw nerve.

After England secured a quarter-final berth in the Euro 2020 champioships after a 2-0 win over Germany, the Croatian said in a tweet that “Singaporeans support England more than Singapore.”

His tweet was supported by a Dr Leigh Jones who said it was “bizarre” and who further reiterated how difficult it was to buy a national jersey in Singapore.

But not everyone agreed with Plazibat’s assertions.

Someone who goes by the handle @CH Peter disagreed, and asked that he be fair, and asserted that “most Singaporeans would pick Singapore over any country to do well in a tournament.”

Then the discussion started to get a little bit heated between the two.

Plazibat said he was facing C H Peter with the facts, and asked that he brought facts to the table instead of feelings.

The fact is – both were responding based on their feelings without any hard facts to back their claims.

Plazibat was saying the he was basing his comments purely on social media comments, which would well be an issue of algorithms, without data analytics to show how many people people supported the Singapore national team vis a vis the England team.

And then the Football Association of Singapore communications manager Teo Teng Kiat added his perspective into the mix, and said that when Singapore played Argentina, Singapore fans turned up in Lionel Messi jerseys.

To which, CH Peter responded, and said that “with games that matter in tournaments, many of us do get behind the boys.”

CH Peter also posted a photo from the FAS archives, trying to prove his point.

Separately, there’s also been an instance when Singaporean footballer Poh Yifeng who was then playing for Balestier Khalsa, turned up at the National Stadium wearing a Japan jersey when Singapore took on Japan in a World Cup qualifier in 2015.

He was flamed online for doing so, but who said that “it doesn’t mean I support them (Japan) just because I wore the jersey.”