Woodlands club aiming to play in the SPL posts image showing it has raised $155 so far. 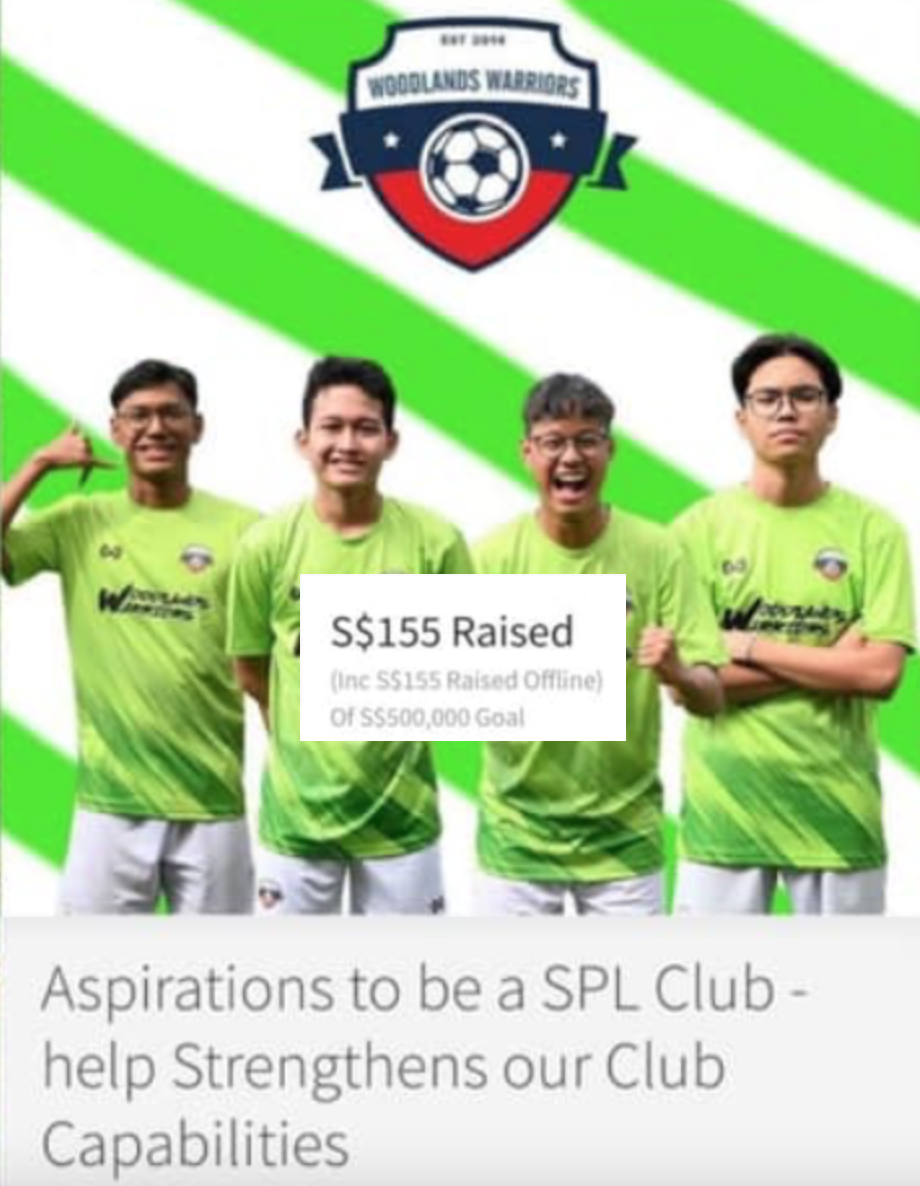 A club in the north of Singapore has set its sights on playing in the Singapore Premier League (SPL) and has launched a crowdfunding campaign.

The club posted on its Facebook page on 15 October and shared its donation link and showed a photo which indicates that it has raised $155 so far.

It said that it had “aspirations to be future SPL Club”.

TMSG reached out to the club via email wanting to know more about its plans and fundraising but did not receive a response yet.

On its Facebook post, it shared that the club was a registered society “that have played in the FAS Islandwide League (Singapore Football League Division 3) for our First Team”.

It also added that its U18 and U16 teams have participated in the JSSL And ESPZEN league competitions and its U14 team has been involved in the Football Association of Singapore U14 development league.

It went on to say that it had a girls team and hopes to play in the “Women National League in years to come” without stating a definitely timeline.

Maybe they can’t because all other amateur league competitions have been suspended for two seasons now with no one knowing what’s next.

The club added on its Facebook page that “every amount that is supported, no matter how small, will help us build our club capabilities and expand our football development programs”.

On 3 October, the club had put up an appeal for funds as it had “aspirations to be a SPL Club.”

Singaporean players’ agent Khairul Asyraf asked about the club’s blueprint but received what looked like a rather bitchy answer.

Another commenter asked the club for its “ROI indexes” if it was keen to attract serious investors.

Another rather vocal faceless commenter wondered whether the club should be crowdfunding to play in the SPL.

In response to queries, the club responded via email as follows.

“The purpose of the fundraising is to garner support from the public, football fraternity in particular, to share with them our club aspirations to be the next developing football club to play in SPL.

“There is a need for a football club to be represented in the North especially after the SPL seated-out clubs like Woodlands Wellington FC and Warriors FC in 2014 and 2018.

“More teams playing in SPL, making it more competitive and bringing a big pool of talent for the national team to select.”