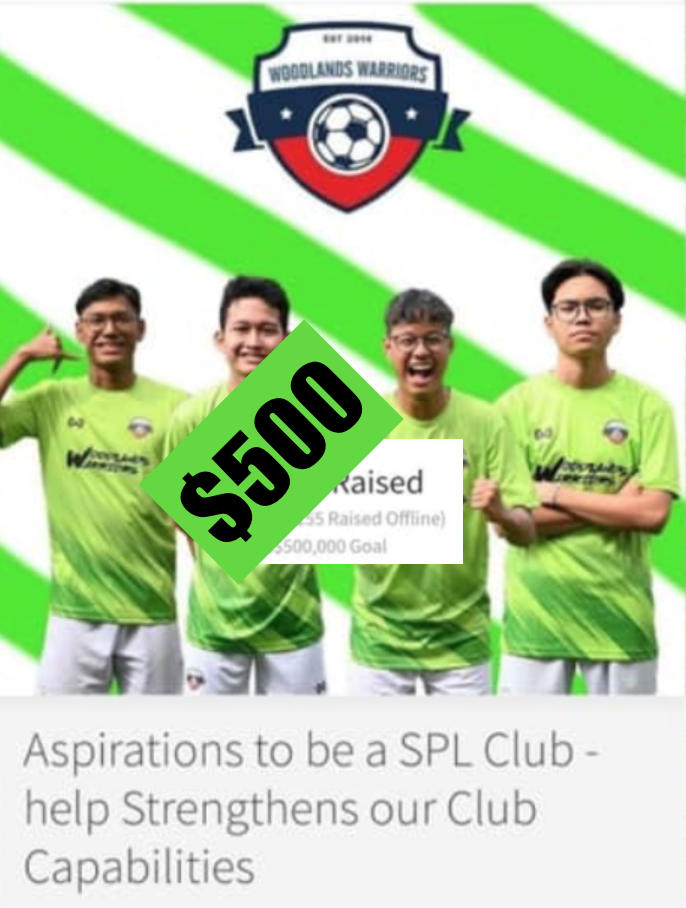 A registered society football club with dreams of playing in the Singapore Premier League (SPL) has raised $500 so far after it posted a fundraising appeal beginning in early October.

On 15 October, it had posted an image showing that it had raised $155 then.

It has now confirmed that it has raised $500 so far for its efforts.

In response to queries, the club said in an email to TMSG that “the purpose of the fundraising is to garner support from the public, football fraternity in particular, to share with them our club aspirations to be the next developing football club to play in SPL. “

It added that there was a need for “for a football club to be represented in the North especially after the SPL seated-out (sic) clubs like Woodlands Wellington FC and Warriors FC in 2014 and 2018.”

It said that it intended to use the funds raised to hire more qualified football coaches on a full time basis, provide more training sessions for the different age-category teams in its football academy set up, marketing and publicity, organising club events and bridging with the different community organisation and also financial assistance funds for players who are unable to pay for training fees, which means that its players are currently required to pay for training.

It added that the “money will also be used for a start-up capital for our Club to propose and stand up as a SPL Candidate to FAS.”

WWFC said that it has 82 active players and 10 inactive players aged between 12 to 25 and uses Riverside Secondary School twice a week for its training sessions.

For more information on the club and its activities, head to its Facebook page.

There are at least three other known clubs with the name Woodlands, none of which play in the SPL.

Woodlands Lions (photo below), Woodlands Rangers and Woodlands United are among the other Woodlands clubs which have emerged over the last few years.

The more the merrier.