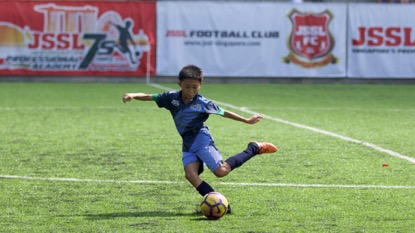 The JSSL Leagues are back, bigger than ever as matches kick off this Sunday 10th September with the Super Leagues in action at the Arena, the home of JSSL Singapore.

More than 3000 players from 200 teams will be in action over the new season as they battle against each other across 22 leagues and 33 divisions.

Managing Director of JSSL Harvey Davis expects intense competition across the various age groups and hopes more talent will be identified from the various groups.

He said: “It is important that young players get the opportunity to compete at their own level which is why we have the Super Leagues for the top players and teams in Singapore and the Championship Leagues which are for fun and development. Our goal is to see evenly matched teams plaing aginst each other across all age groups. This will ultimately help in their player development tremendously, and will also help them to develop confidently as footballers.”

Now into its 13th season, the JSSL Leagues are considered the most extensive and professionally organsied youth competitions available in Singapore for players between the ages of six to 16.

JSSL will be represented by 52 teams across all divisions and leagues in both the Super Leagues and Championship Leagues.

Said Paul Parker the retired England International and Manchester Utd Double winner, “This is an awesome format and competition for Singapore’s youngsters. It is a unique opportunity for all young players to have a taste of competition and also for coaches to network with the rest of the Singapore football community participating in the JSSL League competitions. Hopefully, this marks the first step for players as they aim to become club and national players in future. ”