To be effective, TAFEP needs a backbone. 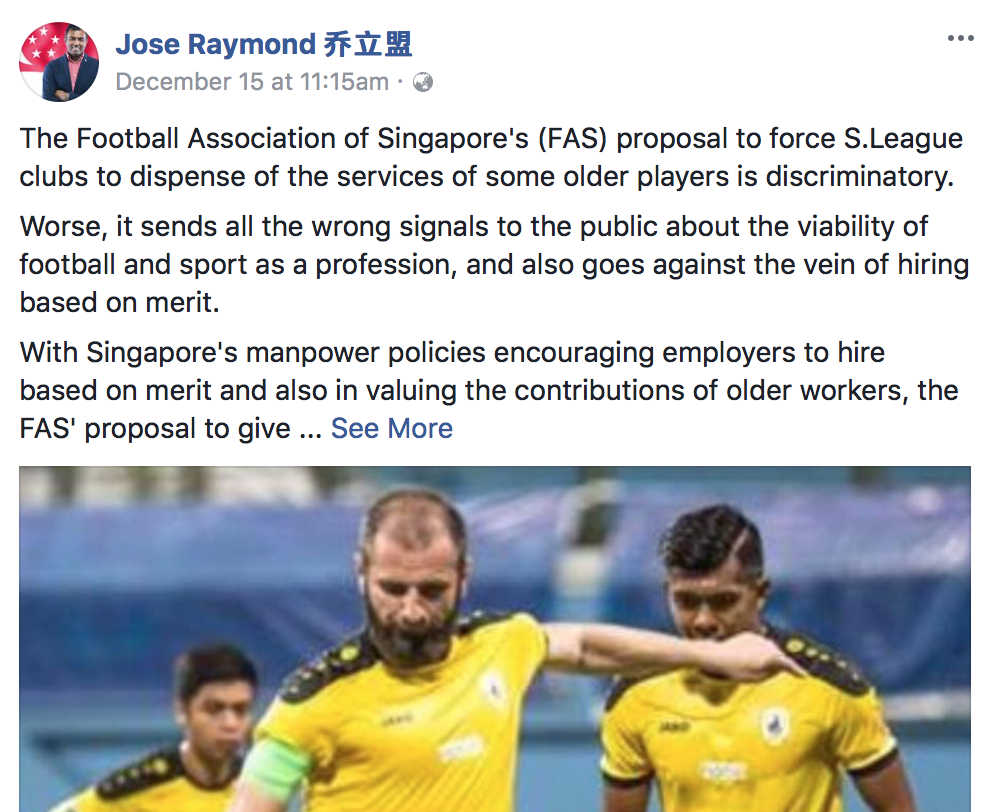 The Tripartite Alliance for Fair and Progressive Employment Practices’ (TAFEP) response to media queries in relation to age restrictions in Singapore’s profesional football league for the 2018 season makes no sense, and is anything but fair and progressive.

In response to the media, a spokesman for TAFEP said “we note the changes were mainly requiring the minimum number of players under the age of 23 years to rejuvenate the S.League and not about imposing age restrictions on the players.”

TAFEP also said that it has been in ‘talks with Sport Singapore’ ahead of the announcement, but did it speak to any of the footballers to have an understanding of what they felt about the rules? Also, why is TAFEP working through Sport Singapore over this matter and not with the Football Association of Singapore (FAS) and the players directly? What role did the Government agency have in this move to force through age restrictions at the clubs?

TAFEP obviously misses the forest for the trees.

Allow me to break it down for TAFEP and make it slightly clearer, since it appears to have forgotten its own role as an organisation.

From 2018 onwards, the S.League local clubs are only allowed to sign a maximum of eight players above the age of 30.

On top of that, clubs must have six to nine U-23 players in their squads and must start with at least three such players during matches.

This is forced down as a policy and the decision is not left to the clubs to decide.

The steps, while meant to resurrect the state of Singapore football, goes against the grain of whatever TAFEP has been promoting.

Age restrictions of any sort during a hiring process is clearly a sign of systematic ageism, as it stops players from being signed based on their merit, but based on their age. Doesn’t this go  against the grain of whatever TAFEP seems to be promoting in terms of halting prejudice against older workers?

The FAS says that no current player over the age of 30 will be denied a playing slot for next season. However, it is not the numbers which matter but the principle of the policy, and the signal it sends.

TAFEP’s statement is baffling and obfuscates, considering that it was only slightly more than a month ago that it stated in a letter published in Straits Times that “mindset change is key to wiping out ageism.”

The same letter also said that TAFEP and the Ministry of Manpower “take a serious view of employers who discriminate, including against older workers.”

TAFEP, in trying to defend the FAS over its action, has failed in its mission to ensure that fair employment practices prevail in football.

The rules which have been set by the FAS are discriminatory, no matter how you look at it, and no matter how much TAFEP tries to avoid it.

Fair employment practices dictate that workers are employed based on merit, and not through their ages or through restrictions.

For TAFEP to be truly effective, it needs to have a backbone.