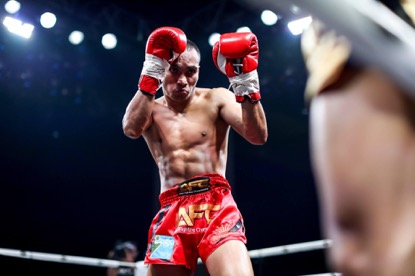 Some of the region’s top muaythai exponents will converge in Kuala Lumpur as the Asia Fighting Championship (AFC) expands into Malaysia.

In addition to Kuala Lumpur, two other dates in the region are also being added for 2018, with city details and confirmed dates to be released at a later date.

The event in Kuala Lumpur, which is scheduled for the middle of 2018, will set to feature among the best muaythai exponents from Asia and the region, with fighters coming from host country Malaysia, Singapore and Thailand.

Renowned Malaysian fighters like captain of the Malaysia muaythai team Ali Yaakub (picture above), Saifullah Ismail and Mohamad Amirul will set to feature in the event, along with Singapore’s Brandon Ng.

The event in Kuala Lumpur is sanctioned by the World Muaythai Council (WMC) and the Malaysian Muaythai Association.

The event in Kuala Lumpur will feature between 10 to 12 professional bouts across six weight classes, and comes at the back of Malaysia’s tremendous set of results at the 2017 Southeast Asian Games in Kuala Lumpur. Malaysia snagged a total of four medals – two gold, one silver and one bronze – at the event.

Said Mr Sasidharan Unnithan, “The AFC was developed primarily to provide a professional platform for muaythai fighters to showcase their talent across the region and worldwide. It is an honour for us to be able to expand the platform and to have the event be staged in Kuala Lumpur for the first time ever.”

President of the Malaysian Muaythai Association Dato Muhd Shahnaz Azmi added, “The sport of muaythai has been growing tremendously over the last few years, including right here in Malaysia. The Asia Fighting Championship will give our fighters a chance to challenge for honours just months after a successful SEA Games showing. It is an honour for us to be able to expand the platform and to have the event be staged in Kuala Lumpur for the first time ever.”

The AFC will be working very closely with the WMC in the organising of the event in Malaysia, which also include ensuring the best practices in safety and medical protocols.

Stephan Fox, the Vice-President of the WMC and the General Secretary of IFMA, added that Malaysia is one of the leading countries worldwide in muaythai. Malaysia also hosted the Emmy-award nominated series Challenger Muaythai 2012, which garnered a nomination at the Emmy Awards for best non-scripted entertainment series.

In 2014 Malaysia also staged one of the most successful muaythai world championships with over 1,000 athletes from over 100 countries.

“With AFC coming to KL it will be another amazing opportunity to showcase their talent in front of some of the most enthusiastic home fans in the world. We are once again excited about the opportunity to partner up with AFC and our Malaysian National Federation,” said Fox.

Malaysian muaythai fighter Ali Yaakub who will feature in the KL event said that he was looking forward to the event in front of his home crowd.

“It will be an amazing opportunity for us to fight in front of our home crowd. I am looking forward to getting into the ring, and to hear Malaysian fans roar for us.”

Ticket sales and details will be released shortly.