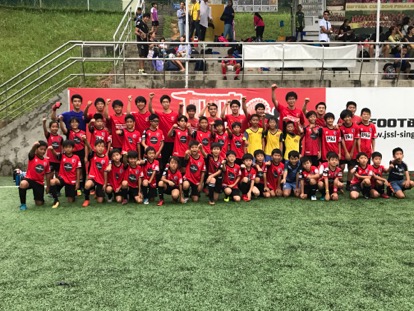 The JSSL International 7s and Professional Academy 7s is all set to kick off with a record participation of 350 teams from 15 nations.

The 2018 edition of the Professional Academy 7s will also feature a stellar line-up of academy players from Liverpool FC, Manchester United, and Fulham FC from England; Urawa Reds from Japan; and Valencia CF from Spain. They would be joined by a Singapore team from JSSL FC.

Teams will get at least six matches under their belts in the group stage, serving a valuable learning opportunity for players to go up against different teams and styles of football. They will bid to outplay one another and secure a spot in the finals, to be played at the Padang on Monday, April 30th.

The preliminary round match up against Manchester United and Liverpool academies will take place on Saturday at 7.50pm at the Padang.

Said JSSL Singapore Managing Director Harvey Davis, organisers of the JSSL International Soccer 7s and the Professional Academy 7s: “JSSL is a brand which is now synonymous and associated with quality and professionalism in youth football development. We are all raring to go for this year’s event at the Padang.”

The Guest of Honour for this year’s event is former England striker, Teddy Sheringham, who scored more than 290 goals over a 22-year career where he turned out for the likes of United and Tottenham Hotspurs. He is part of the Red Devils’ historic Treble-winning side of 1999, and fondly remembered for his role in the UEFA Champions League win that year against FC Bayern Munchen. He grabbed a stoppage-time equaliser, before providing the assist for the winning goal on the stroke of full-time.

Also in town for the event will be Manchester United Academy Director Nicky Butt, one of members of Sir Alex Ferguson’s Class of 1992.

Added JSSL managing Director Davis: “This year’s tournament has gotten even better than last year’s, thanks to the generous support of all our sponsors and partners. What has always been at the core of the JSSL 7’s is the unique experience that the children and their families walk away with from Singapore and the JSSL 7’s. This in return ensures their return to Singapore year after year which is seen in the tremendous growth for this year’s event.”