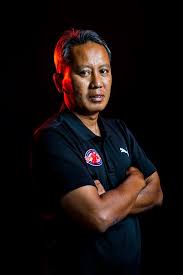 Saswa, as he is affectionately referred to since his Malaysia Cup days, was appointed as the replacement for Aidil Sharin who left the Protectors to join Kedah.

Said Badri Ghent, Home United’s General Manager: “Following a global search, we found that there was no place better to look for our next head coach than at ‘home’.”

Sounded vaguely like what was announced when SMRT announced the replacement for Desmond Kuek.

Saswa, 49, said: “To become the Head Coach of Home United is a special honour.”

Saswa was a member of Singapore’s Malaysia Cup and League winning team in 1994.