1989 – the last time Singapore was in a SEA Games football final. 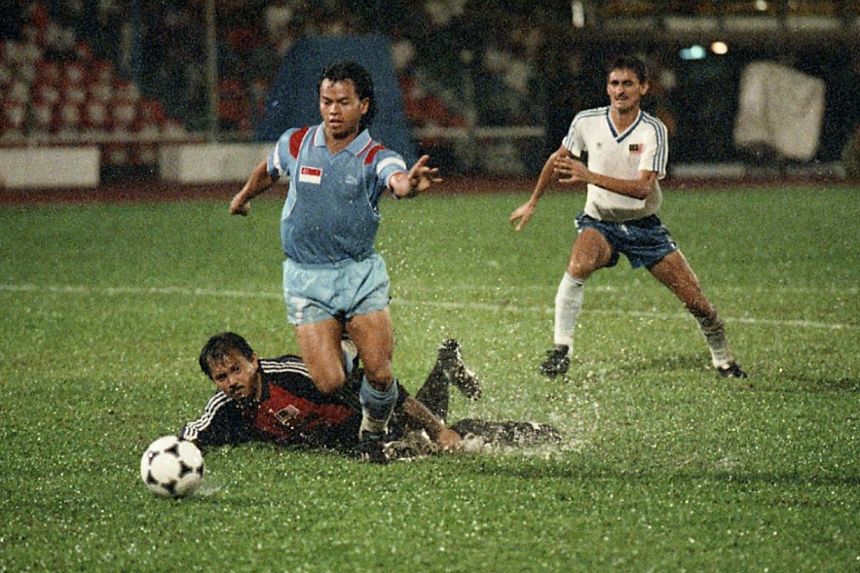 The 2021 Vietnam Southeast Asian Games may still be months away, if it takes place at all.

And once again all eyes would be on the Singapore U-23 football side, especially with the  recent announcements about Singapore’s ambitions to qualify for the 2034 World Cup.

At the SEA Games level – the lowest level of competition, compared to the Olympics, Asian Cup and World Cup – the Lions (and Young Lions) have failed to make the finals for 32 years now.

The last time Singapore entered the finals was back in 1989 when the biennial Games was held across the Causeway in Malaysia.

It was the third time that the lethal forward combination of Fandi Ahmad – V Sundram Moorthy combination was getting together for the Games, with both players part of the 1983 and 1985 silver winning sides as well.

More interestingly, both players were playing professional football in Malaysia at the time with Sundram donning the hijau-kuning jersey in Kedah and Fandi with the red-striped Kuala Lumpur FC.

In the 1989 SEA Games tournament, the Lions were drawn in Group A against Thailand and Myanmar.

In Group B, Malaysia went up against Indonesia and then regional whipping boys Brunei and the Philippines.

Singapore had geared up for the Malaysia SEA Games with a 4-1 victory over Qatar at the National Stadium on 17 August 1989, giving coach Jita Singh and his charges the perfect booster before they boarded the flight for Kuala Lumpur.

The current FIFA rankings was only started in 1992, and at that time, Singapore was ranked 89 by FIFA while Malaysia was not far off at 91.

With only two matches to play at the SEA Games, Singapore first went up against Thailand on 24 August, with the Thais having already started their campaign with a 3-0 win over Myanmar two days prior.

Against Singapore, Thailand went 1-0 up in the first half through Piyapong Pue-on, but Singapore levelled the scores before the final whistle earning the Lions its first point.

Then against Myanmar two days later, two goals in each half helped Singapore to a 4-0 win over Myanmar, and lifted it to top in the table.

Against Indonesia in the semi-final on 28 August, it was Fandi Ahmad who scored Singapore’s winner with just a minute left on the clock, setting up a dream final against arch rivals Malaysia, whom disposed off of Thailand in the other semi-final tie.

The final at the Merdeka Stadium was held on 31 August, Malaysia’s Independence Day, and present within the VIP box were various Cabinet Ministers, led by their then Prime Minister Mahathir Mohamad.

Malaysia’s Lim Teong Kim sent in a cross from the left flank after cutting past Singapore’s fullback ARJ Mani.

With Zainal Abidin closing in and attempting to connect with the cross, Singapore’s defender Borhan Abu Samah attempted a clearance, but the ball hit Singapore goalkeeper Abdul Malek and then swivelled into the back of the net.

But the Lions did not lie down and play dead before a vociferous partisan 40,000 capacity crowd.

With about five minutes left of the clock before the breather, Singapore skipper Terry Pathmanathan took one of his trademark throw ins in the Malaysian half.

D Tokijan was first to nod it towards goal and with four defenders on his back, Fandi unleashed an acrobatic scissors kick which had Malaysian keeper Rashid Hassan beaten.

Just as the players were returning to the field for the second half, the skies opened and it started to pour.

And with the rain beating down on the Merdeka Stadium green, Singapore’s hopes of a gold medal were doused in the showers from the heavens.

First, it was Lim Teong Kim who inflicted pain on the Lions when he took on Maran on the left and then just aimed a speculative lob at the Singapore goal, which caught Abdul Malek completely unaware, and then beaten.

And two minutes later, it was Dollah Salleh who buried the ball into the back of the Lions net with a firm header which appeared to have stunned Abdul Malek such that he just watched the ball sail in without attempting to try and save it.

After Indonesian referee Hartosardjono Soetoyo blew for full time, the Malaysian Tigers did a lap of honour in the rain around the iconic Merdeka Stadium.

And to celebrate the victory and the closing of a successful SEA Games in Malaysia, Prime Minister Mahathir declared the next day, a Friday, a pubic holiday.

The Singapore football team has not made the finals of the SEA Games ever since, and came closest in 1993 when it hosted the Games.

In 2015, when it hosted the Games again, and despite having a special task force to support the team to win the gold, the side never got past the group stage.