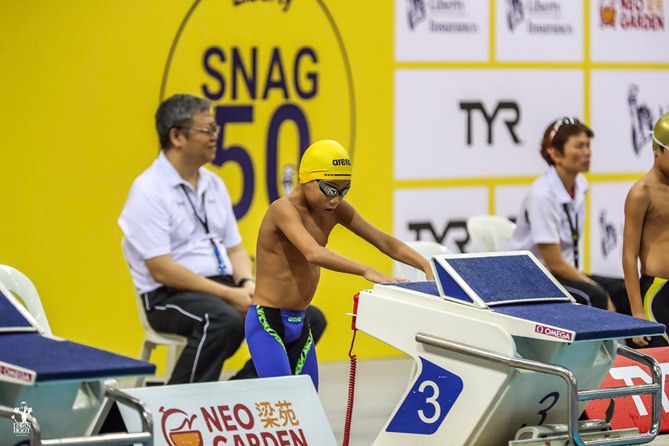 In the boys 100m Breaststroke, 8-year-old Jayven Teo (photo) snagged his second meet record in his age group when he clocked a time of 1:32.97s, eclipsing the old mark of 1:38.99s set in 2015 by Marcus Choo of Singapore Swimming Club (SSC).

“He is the youngest swimmer in my group and he trains very well. After the January and February time trials, I knew that he was capable of beating the meet record in the breaststroke, as the breaststroke is his pet stroke. I did not give him any pressure today, but just to focus on his technique and his race, and to see him lower the meet record by almost 6s, I am very happy”, said his coach, Wu Yang.

Also bagging his second meet record was Jinson Wang of Aquatic Performance Swim Club (APSC). The 9-year-old, who had also set a new record for 9-year-olds in the 50m Freestyle on Friday, continued his dominance in the freestyle with a time of 2:21.25s in the 200m event, beating the record of 2:30.76s set by Reagan Cheng of CSC in 2017.

Speaking after the race, his coach, Qi Min Jie, was delighted with his charge’s performance. “Jinson is very hardworking during training, and he has the full support from his parents. I was expecting him to swim a timing close to the meet record, and so I am very surprised that he broke the meet record. I am very happy with his swim today.”