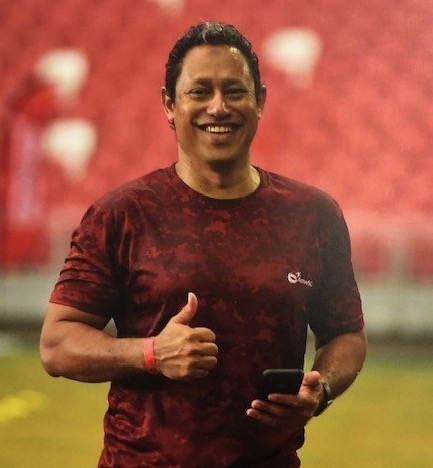 The Singapore Athletic Association (SA) announced today that it has appointed Malik Aljunied as its new Executive Director from 1stJuly 2019.

The 51-year-old, who is a familiar figure in the athletics fraternity, will be seconded to SA from the Singapore National Olympic Council (SNOC) for a period of three years.

“Malik has been involved with athletics for a very long time. As a former hurdler, coach and sports administrator, he has held important roles within our fraternity and understands our aspirations.

“I am happy that he has yet again accepted the calling to lead SA as its Executive Director. I am confident that he will help us – the athletes, coaches, officials, fans and the entire athletic community, to aim higher, faster and further. I would like to thank the SNOC for allowing Malik to join us,” said SA President Tang Weng Fei.

Malik’s stint with SA will be his second during his career.

He had an illustrious 33-year National Service (NS) stint, serving NS in the Singapore Armed Forces, Singapore Police Force and a final tour of duty with the Singapore Civil Defence Force as a Colonel.

He also served as a Head of Department with the Ministry of Education and was the CEO of a public-listed company from 2011 to 2012. Malik was with Sport Singapore as the Deputy Director of Character & Leadership Development under CoachSG, before joining SNOC.

“I am grateful for this privilege to serve the athletics fraternity as SA’s Executive Director. I aim to bring enhanced professionalism and governance to SA and the fraternity.

“Together with our stakeholders and the athletics community, I will operationalize SA’s mandate of being athlete-centric and coach-driven. I believe athletics is the foundation for all sports and has the inherent quality to engage all ages, gender, race and ability. From recreational to elite, SA will serve all to enjoy this magnificent sport,” he said

The Management Committee member position vacated by Malik will be filled up by veteran sports administrator Dr Ho Mun Wai, who will be co-opted with effect from 1 July 2019. These changes will be in place until the next election for office bearers in 2020.

Ho has served Singapore sports in multiple roles. He held several portfolios with Sport Singapore from 2005 to 2009 and was the Chef-de-Mission for Team Singapore at the Asian Indoor Games in Macau in 2007.

He has also served as a member in the management, selection and appeals committees of several National Sports Associations.