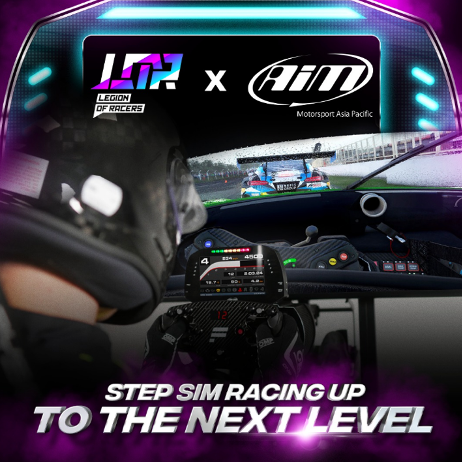 The Legion of Racers (LOR), organisers of the LOR Online League season 2020 in simracing has entered into a new partnership with Aim Motorsport Asia Pacific (AIM).

Simracing is one of the newest and rapidly growing frontiers in the world of motorsport. In Singapore, the LOR Online League season 2020 saw a 100 per cent increase in its number of participants for the ongoing season compared to 2019, with 75 signups for the current season which began in 12 June.

Said Jason Burns, Director of AIM, “We at AIM Motorsport Asia Pacific are delighted to team up with the leading Asian E-Motorsports racing team the Legion of Racers.

“Through this valued partnership, we will be showcasing our market leading universal colour dash display MXG 1.2 Strada which is suitable for E-Motorsport and also Motorsport. All AIM products will be available from the team at Legion of Racers with service and technical support based in Singapore for Southeast Asia.”

The partnership with LOR will see AIM provide a data logger system for the LOR studio which will provide proper data analysis for all its simracers, which will benefit all of its professional simracers.

“This partnership is a win-win for both parties as we leverage on each other’s strengths. AIM Motorsport Asia Pacific helps to take all simracers closer to the realities of motorsport and will only help enhance the game-time experience for our simracers,” said Melvin Moh, co-founcer of LOR.

Added Burns, “Gone are those old days when gamers used to plug the steering wheel at the table playing set on the kitchen chair. Simracing is now as professional as real motorsport and that’s why e-racers and real racers as well are asking for more every day. As data-driven provider, AIM is ready to step Sim Racing up to the next level, using the same exactly technology we provide to World Class motorsport teams and racers.”

LOR official website at www.legionofracers.com/loronlineleague2020 or follow Legion of Racers on their Facebook@LegionOfRacers for updates and more details.