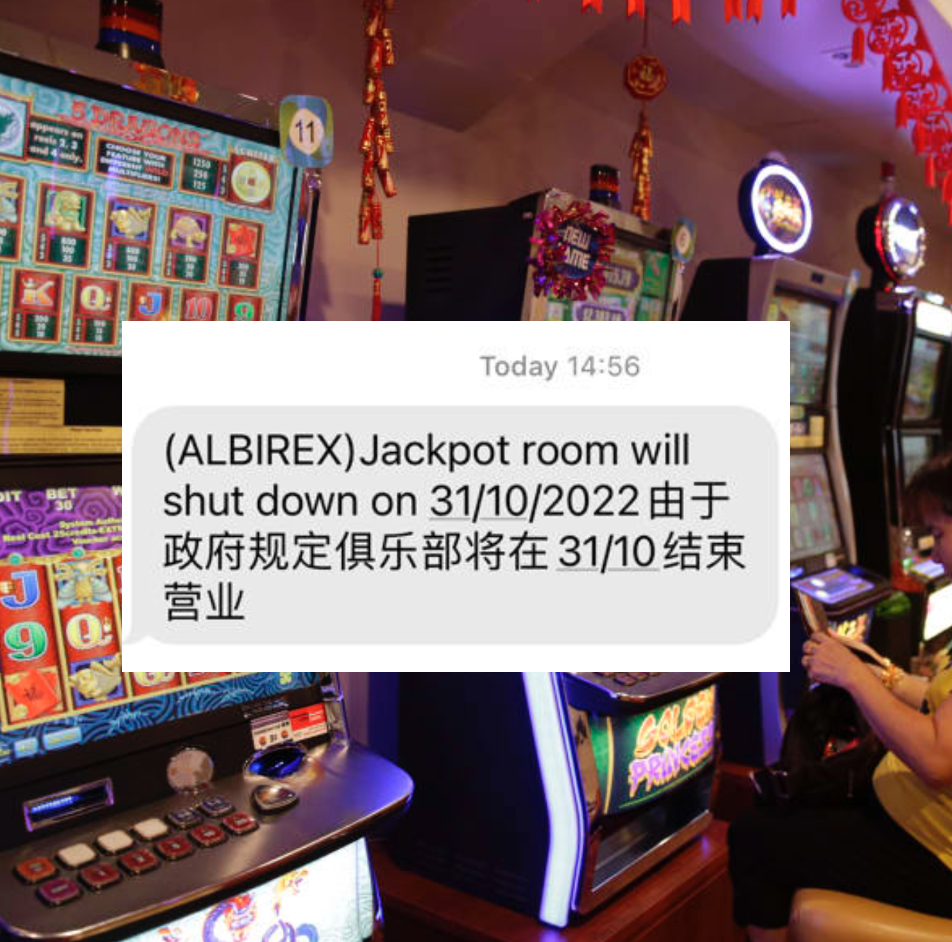 With effect from 31 October 2022, all existing Singapore Premier League clubs will not have their current licenses to operate jackpot rooms renewed by the authorities.

Over the last few weeks, TMSG understands SPL clubs which are still running jackpot operations have been preparing for the final shutdown, after having been given the final notification on 15 September.

Albirex Niigata, which runs their operations in Chinatown, sent out an SMS alert to all their clubhouse members with a simple message which read “Jackpot room will shut down on 31/10/2022”.

Lion City Sailors, Tanjong Pagar United and Young Lions do not have jackpot rooms while the rest of the teams were still operating their clubhouses over the last year.

The move to weed out jackpot rooms and machines is not new, and has been on the cards for the last five years ever since it was reported that the Ministry of Home Affairs (MHA) was going after clubs which had been paying lip service to conditions for operating jackpot rooms by making jackpot gambling the main activity on their premises.

In 2017, it was reported that the 1,900 jackpot machines at 82 clubs in Singapore were expected to fall by about one-third within two years.

SPL club revenue from jackpot operations have varied over the years.

Previous reported figures indicate that SPL clubs can earn anywhere between $25,000 to $40,000 a month before costs and taxes from jackpot operations.

In some instances, clubs have also earned millions.

These figures were pre-pandemic, with no recent reports available on current takings with members of the public not able to have sight of how much SPL clubs earn through their jackpot rooms.

The information is submitted to the Registry of Societies.

The mind-boggling figure from jackpot takings will always be the $36.8 million which National Football League side Tiong Bahru FC reported as takings in 2016.

Over the years, ‘sit-out’ clubs like Gombak United and Warriors FC, have also lost their jackpot licences.

Sinchi FC, a team which played in the S-League from 2003 to 2005, only shut down their jackpot operations in 2017 and was still unbelievably operating their jackpot room even though they had ceased to be an affiliate of the Football Association of Singapore.

Former Warriors FC manager Paul Poh was once quoted in 2017 as saying that the jackpot licence was still important for clubs, and without it, “the whole system will collapse”.

The loss of any kind of revenue will mean that clubs will be set back, in some instances, as much as a third of operating budgets.

With sponsorships a challenge, and broadcast rights fees unheard of in Singapore given the low visibility and following, clubs which still depend on the jackpot revenue will need a quick fix.

Former Gombak United chairman John Yap, who was aware of the cut in jackpot licences for SPL clubs recently, said that the immediate action which was needed was the realisation that there was very little commercial value for SPL clubs, given the small size of Singapore’s population and followers.

“Why are sponsorships hard to come by, that is what which needs to be addressed,” he said.

Geylang International coach Mohd Noor Ali said that the immediate issue he will have to navigate would be signing players for next season.

“If the club does not know how much it will be getting for next season, it will be hard for any club to start planning for the players roster for 2023,” he told TMSG.

The other issue would be what would happen to clubs which had signed players on multi-year contracts.

How will clubs maintain a steady revenue stream and ensure these players’ contracts commitments are fulfilled?

Sources have informed TMSG that a new operating model will look after the administration of the SPL from 2023 onwards, which is expected to come under the care of “Unleash The Roar”, a project announced by Minister for Culture, Community and Youth Edwin Tong designed to raise the standards of football in Singapore.

The announcement of a “special purpose vehicle” to run the league, with additional subsidies for clubs, is widely expected to be announced over the next few months, with the new operational entity set for operation after the Committee of Supply debate for the next financial year.