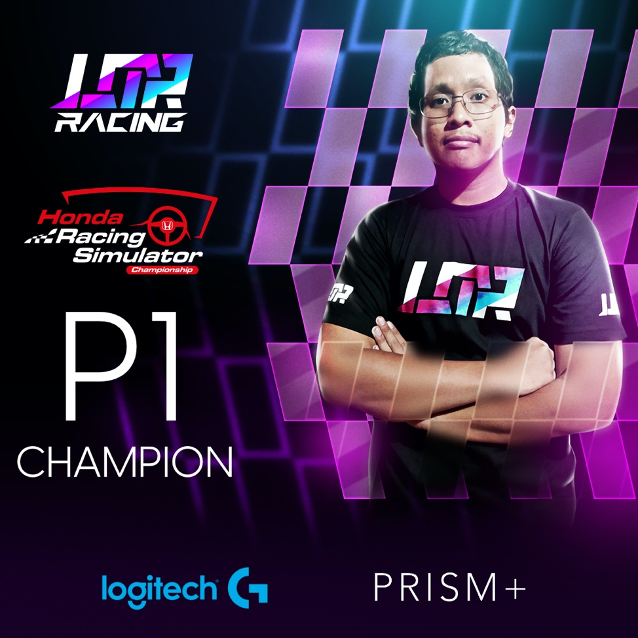 Legion of Racers (LOR) athlete Andika Rama who is based in Indonesia has emerged champion of the Honda Simulator Championship. The tournament was held for simracers in Indonesia.

Organised by Honda Prospect Motor and HM Engineering, participants tested their skills against each other in rFactor 2 and utilised the Honda Civic Type R FK8 TCR Spec. The championship required participants to race over six rounds in the tracks of Suzuka, Sepang, Silverstone, Interlagos, Zandvoort and Estoril and was made up of two classes – the Pro and Am.

Rama participated in the Pro category and was champion, after emerging in top position in five of the six races. For his efforts, he collected 20 million Indonesian Rupiah (about S$1860) and a championship trophy.

Said the LOR athlete, “It’s been a wonderful journey and championship past two months.  I decided to go all the way at this championship, had countless sleepless nights, and focused just to find the perfect setup and practice to get a great result. It was a tricky car, with a tricky track combination. I really pushed myself even harder than before.”

He added that he practiced not only just to be fast, but also had to think about the many strategies whilst in the midst of the races.

“I had to think about many strategies, like how to make a move on overtaking, know how and when to preserve tyre and when to push hard, also learn how’s the Qualifying Setup and Race setup as they were very different. Thanks for team Legion of Racers for support me all the way and letting me do my best every round, and thanks to all my friends here who helped me sharing idea about setup and accompany me practice every day.”

LOR co-founder Melvin Moh gave Rama the credit for emerging victorious in his home country in Indonesia, which cements Rama’s standing as one of Indonesia’s top simracers.

“It is really great to see Rama winning the championship in his home country and it proves that he’s one of the top simracers there. We agreed to let Rama sit out of certain races so he could focus on this championship, which has proven to be the right decision. The Legion of Racers is proud of what he has achieved this year and looking forward to many more results like this, for him and other members of the LOR team.”