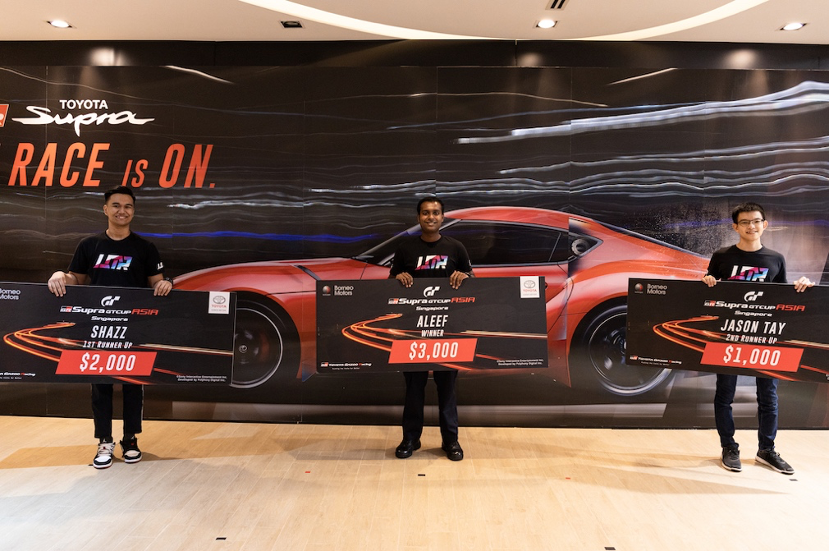 The weekend ended on a high note for Legion of Racers simracers as they finished in podium spots at multiple competitions.

Ar Aleef Muhammad picked up the eRGP Global Edition (American championship), making it a hattrick of three titles at the eRGP competitions. In addition to Aleef’s exploits, Andika Rama finished in second spot at the Logitech G Challenge Asia Pacific Quarterfinals, which qualifies him for the Regional Final to be held in November.

The icing on cake for the Legion of Racers was when three of its simracers – Aleef, Jason Tay and Nur Shazliezhan collected their prize earnings for coming in the top three spots at the Toyota GR Supra GT Cup (Singapore leg). All three simracers will now be on the starting grid for the Toyota GR Supra GT Cup Asia 2020 Regional Round which will be held in October 2020.

Said Aleef, who is also currently serving his National Service, “I am absolutely stoked to have won the ERGP Global Edition Championship for the 3rd time in a row! We used much more trickier cars this time around with the Indycars, using mainly American circuits, which made my job much tougher. With ballast playing a bigger role in these single seaters, I had to find an extra gear and perform at a higher level to make sure we could retain the title.”

With other top simracers like Singapore-based Mikko Nassi and Malaysian Naquib Azlan breathing down his neck, Aleef found that he needed to be more precise and adopt a sound tactical approach before he was able to emerge as the winner of the competition.

It was all the more sweeter for Aleef having been able to take the championships with a round to spare.

It was not as straight forward for him in the Logitech G Challenge Asia Pacific Quarterfinals though, where he suffered a penalty which then dropped him to fourth place which ruled him out of the regional final. However, his misery was another LOR simracer Andika Rama’s gain as the Indonesian found himself moved up to second spot and in the process earning a spot in the regional final.

Andika had started the race in third spot, and was following his team-mate Aleef all the way to the chequered flag but was then bumped up to second spot after Aleef’s penalty.

Said Andika, “I practiced almost every day so that I could be really fast in this championship. I participated in almost every round of the qualifying time trial round and it now seems worth it. I also faced many ProjectCARS2 fast drivers like Daniel Shields, THR m0o0o7, and of course my fellow team-mate former AP Champion Aleef Hamilton. The field was really strong overall, and all the hard work over the past few months have really well paid off!”

To cap off a sizzling week for LOR, the trio of simracers from the team – Aleef, Nur Shazliezhan and Jason Tay collected their prize winnings on 18 September for winning the GR Supra GT Cup Singapore at the Toyota Showroom in Leng Kee.

They walked away with S$3000, S$2000 and S$1000 cash prizes respectively. The 3 boys will represent Singapore and compete in the GR Supra GT Cup Asia which will be held in October.

Said Melvin Moh, co-founder of the LOR, “We are really proud with what the boys have achieved recently as they continue to show top results not just in Singapore, but also in the regional races. This is a testament of our esports team and highlights the talent that we have. Now we will concentrate on the upcoming races and we will continue to support them to give them the best opportunity to perform and hopefully achieve a top result in the races.”