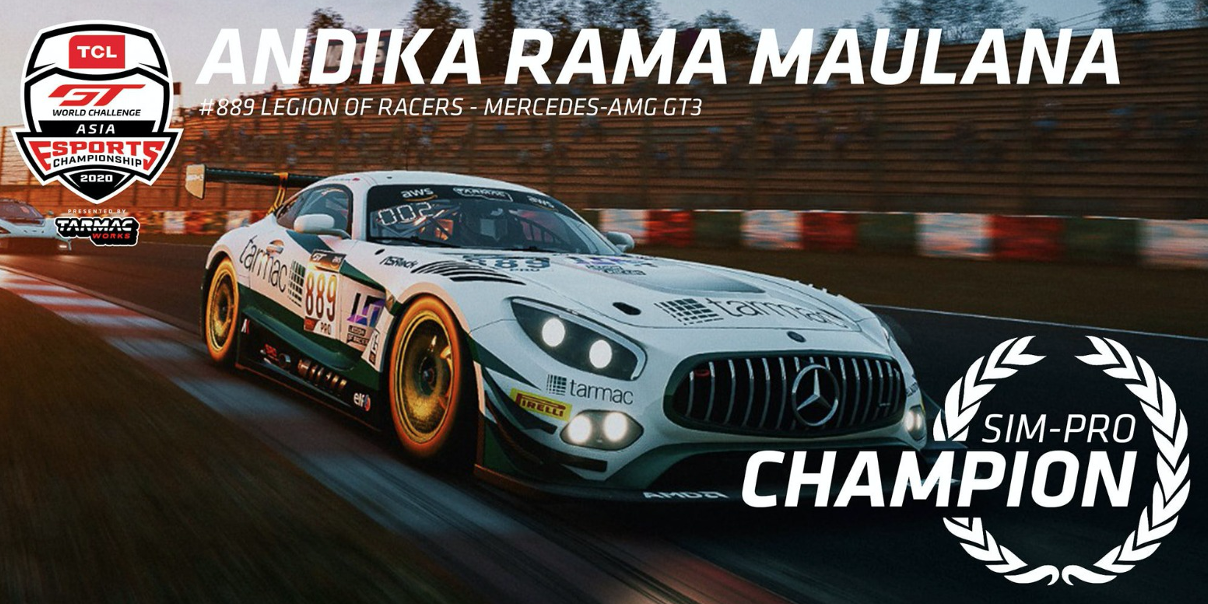 The championship season was held over five rounds which started in October and had the drivers visiting famous circuits around the world like Monza, Circuit-de-Spa Francorchamps and the legendary Suzuka Circuit in Japan.

Indonesian Rama headed into the final round in Suzuka with a 22-point advantage to his nearest rival Kin Long Li from Hong Kong and was guaranteed the title as long as he did not finish not lower than 8th position in the final race.

However, it did not start well for him in the final race when the lights went out as he came into contact with Pole Sitter Karl Petersen and was given a penalty which dropped him down the order. However, he displayed his “never say die” mentality and came out fighting, and gave chase to the pack in front of him.

He also risked it all when he almost crashed with another car during his fight back up the order. At the end of the hour-long race, Rama came home in 6th position just behind his rival Kin Long Li and sealed the championship.

The LOR’s other pro athletes also were involved in the race with Ar Aleef Muhammad making a one-off appearance and finishing 14th in the race while Luis Moreno came home in 22nd position.

Said Andika Rama after his victory, “”It was a hard race for me, and I didn’t get a clean good lap. During the race I accidentally hit Karl Petersen at lap 1 which cost me a Drive Through.

“Despite of that I was trying my best to recover from the mistakes and in the end P6 Overall and P3 in Class is already a big achievement from me, and Taking the Sim-Pro Champion Title is surely something else! It’s my first Assetto Corsa Competizione that I have ever attended and already delivered such a great result!

“Thanks for the Team Legion of Racers for keep supporting me and grow together to be a better team, thanks to organizer SRO and AK Informatika for organizing such a great event. I’m really looking forward to the next year season!”

Said LOR co-founder Melvin Moh, “This is a big result for Legion of Racers to have Rama win one of the largest sim racing championships in Asia.

“This again shows that our talents have what it takes to compete with the best in Asia, if not the world. Big thanks to Rama and Luis for putting so much effort into this championship and thank you to Tarmac Works for supporting the team. This has been a very good result to end the 2020 season and we will be working extremely hard for next year!”