Unleash the Roar: The aftermath of a disaster announcement. 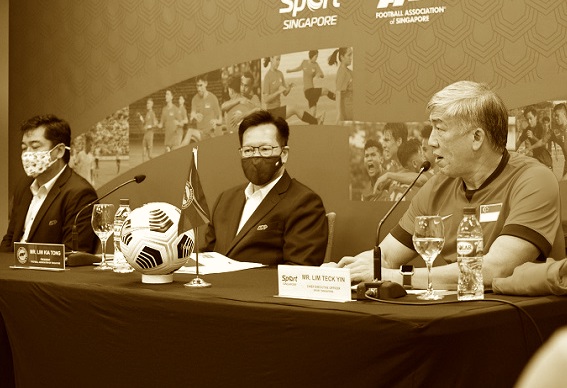 Judging by online sentiment alone, the announcement of Singapore’s grand football plan to qualify for the men’s World Cup in 2034 has been nothing short of a disaster.

It will be hard to argue with the fact that the general reaction from the public has been somewhat negative.

On the ground, a snap survey of 15 random people yielded similar results, with most thinking that the announcement by the Ministry of Culture, Community and Youth over a plan to rally Singaporeans through football was far-fetched, and lacking details.

On social media, the comments have been fast, furious and not entirely supportive.

Just a snapshot of some of the comments.

Why has the reactions been so valiantly opposed to the idea or the proposal, given that the average football fan should be generally pleased that there is a top-down approach to get the game going in Singapore?

As former journalist Stanley Ho stated in a Facebook post, the Singapore football fans are somewhat like jilted lovers and it’ll “take a hell of a lot to win back the hearts of these jilted lovers.”

Critics also point to the person fronting the programme from the Football Association of Singapore – Bernard Tan.

Not exactly the best face for such an announcement simply based on some of the announcements he had made in the past.

For example, in 2014, he had said how he had wanted to revolutionalise primary school football in Singapore, and also had stated that he was aiming to have a Singapore youth national team qualify for the U17 World Cup by 2019 and 2021 based on merit.

After four years, the same SFA surfaces in the Unleash the Roar concept, which only means that the idea was never executed when announced in 2017, for whatever reasons.

So what made the FAS decide to have Tan front this current campaign, especially when the internet never forgets?

Could it have chosen another face as the messenger of the project, someone who would have a lot more gravitas in the football circles in Singapore.

Like Teo Hock Seng, who is a vice-president in the FAS, a former Tampines Rovers chairman and also the Chairman of the Singapore Grand Prix.

A former Member of Parliament TMSG spoke to also felt that a better strategy for the FAS would have been to just quietly make the changes to the football system, and if the changes bore fruit, then reflect and reveal.

Without a fair sense of what was the ground sentiment, and a general lack of all-round engagement, it was going to be an uphill task to preach to both fans who were disillusioned, or the unconverted.

It was pointless in trying to force feed an idea to the general public, and just ignoring that the sport was not exactly in a sweet spot to make such bold announcements, the former MP felt.

The lack of details in the announcements by both the FAS and Sport Singapore, with the bulk of details all still yet to be worked out, was yet another spanner in the spokes.

Academic Dr Adrian Kuah of the Futures Office of the National University of Singapore, asked in a Facebook post, “Where are the pathway, where are the adjacencies in case our budding footballers don’t quite make it? Where is the broader eco-system in which football in necessarily enmeshed?”

Another factor which did not go unnoticed was that if this new project was supposed to need the support of many government agencies like the Ministry of Education, the Ministry of Defence and perhaps even the Singapore Land Authority, then should a political appointee higher in office be the face of the national campaign?

Think how it was a whole of government effort when Singapore hosted both the Youth Olympic Games (2010) and Southeast Asian Games (2015), and how it was the Prime Minister no less who fronted the unsuccessful Goal 2010 campaign when it was announced in 1998.

Also, it is rather problematic as a policy if the people who peddle the Unleash the Roar project keep harping on the fact that even if we fall short of making it to the World Cup in 2034, we are winners still if there is an all-round vibrant football eco-system.

Imagine if the first generation of leaders had made the same pronouncements when they asked for the support from the public when they wanted to put roofs over people’s heads, seek water self-reliance or even clean up the Singapore River.

There was no such thing as ‘it’s ok if we didn’t make it, at least we tried.’

There was a need to have the conviction to see through the goal.

As of now, the Goal 2034 vision runs the risk of an early death even before it comes to life.