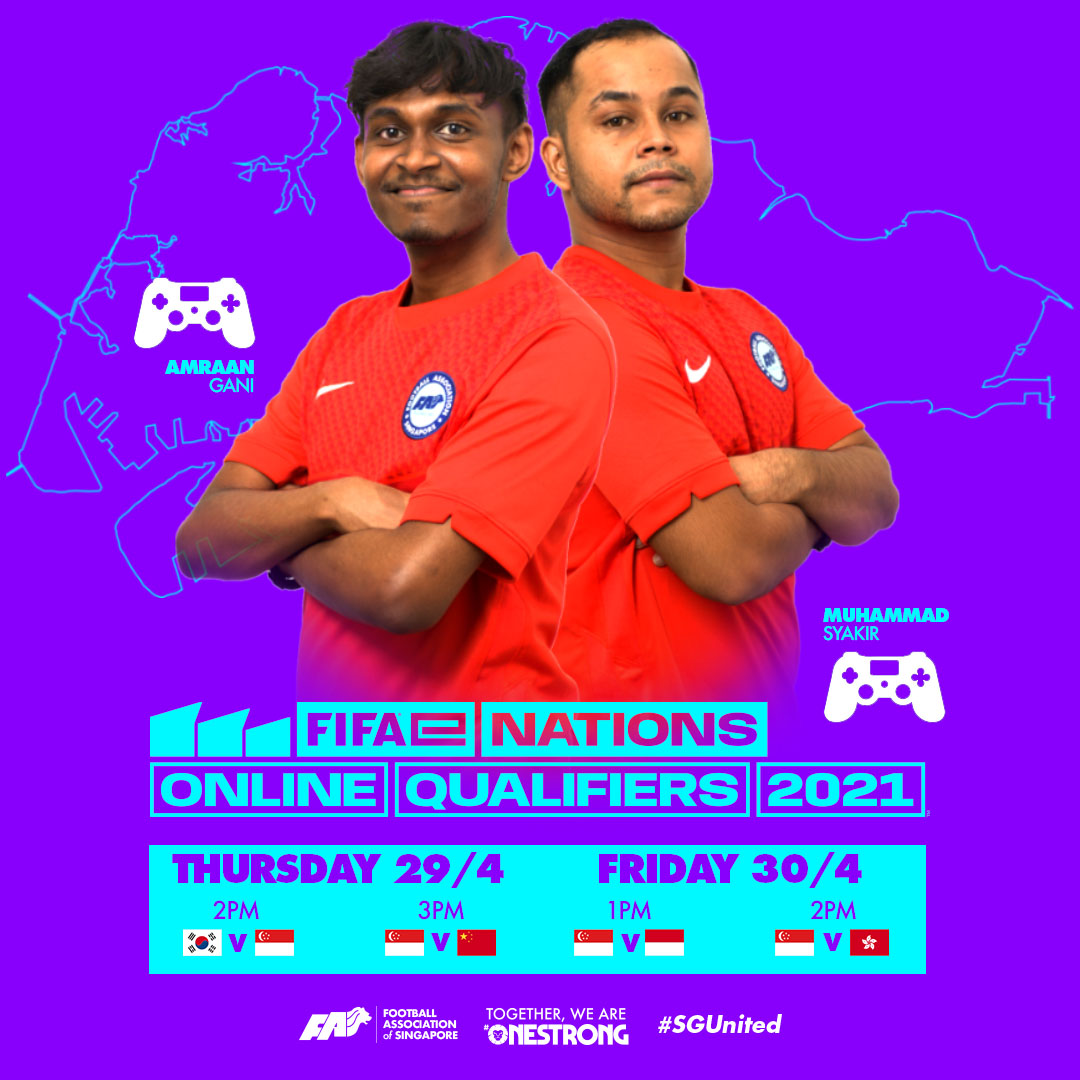 Amraan Gani and Muhammad Syakir have been called up to represent Singapore in the FIFA eNations series 2021, an international esports tournament that is part of a global initiative between EA SPORTS and FIFA.

The tournament will see 60 participants from all over the world pit their skills against each other in the popular video game FIFA21.

The world’s biggest national team competition involving FIFA21 has seen a 200 percent increase from the previous instalment in 2020.

Singapore has been drawn into Group B, together with China, Hong Kong, Indonesia and South Korea, whereas Group A comprises Australia, Japan, Malaysia, New Zealand, Philippines.

All qualifying games from this zone will take place from 29 April to 1 May.

Singapore’s two representatives, Amraan Gani and Muhammad Syakir, were selected based on their FIFAe Global Series ranking, with the former currently ranked ninth while the latter is ranked eleventh in the East Asia Zone out of a total of 139 competitive players in the East Asia Zone.

In the event Singapore finish in the top two, they will proceed to the knockout stage on Saturday, 1 May and face one of the top two from Group A.

Amraan, a professional eSports player from Team Flash, has played FIFA since the 2012 edition and spends a weekly average of 15 to 20 hours honing his skills.

“I am really proud to represent Singapore in this tournament and it is an amazing opportunity for us to bring glory to Singapore.

“My goal will be to do well in the group stage to qualify for the FIFA eNations Cup in Denmark,” the 27-year-old said.

Syakir, who averages 10 to 15 hours of practice a week, started playing video games when he was just five years old.

His interest in the game spiked after placing fourth in the Campus Gamefest tournament in 2015, and subsequently turned pro.

“It is a huge opportunity for me to be representing Singapore.

“So far I’ve always been playing the game for myself, but now that I have been given the chance to represent my own country, I’m definitely going to do my absolute best for it.

“As a kid, my dream was to play football for Singapore, but that dream was hindered by the injuries I suffered over the years so I guess representing them in the virtual arena is the next best thing,” said the 25-year-old.

The competition format for the group stages will be a 1v1 played out in a single round robin.

Each team will play against each other once on the Sony Playstation 4 platform and another time on the Microsoft Xbox.

The top two teams from each group will then progress to the knockout stage where the winners of one group will take on the runners up from the other group.

The top 24 teams to emerge from the five regional online qualifiers will then pit against each other to vie for the ultimate FIFA eNations Cup that will take place from 20 to 22 August in Copenhagen, Denmark.

The schedule for the group stage matches can be found in the table below and all games will be streamed “live” on the Football Association of Singapore’s Facebook page.