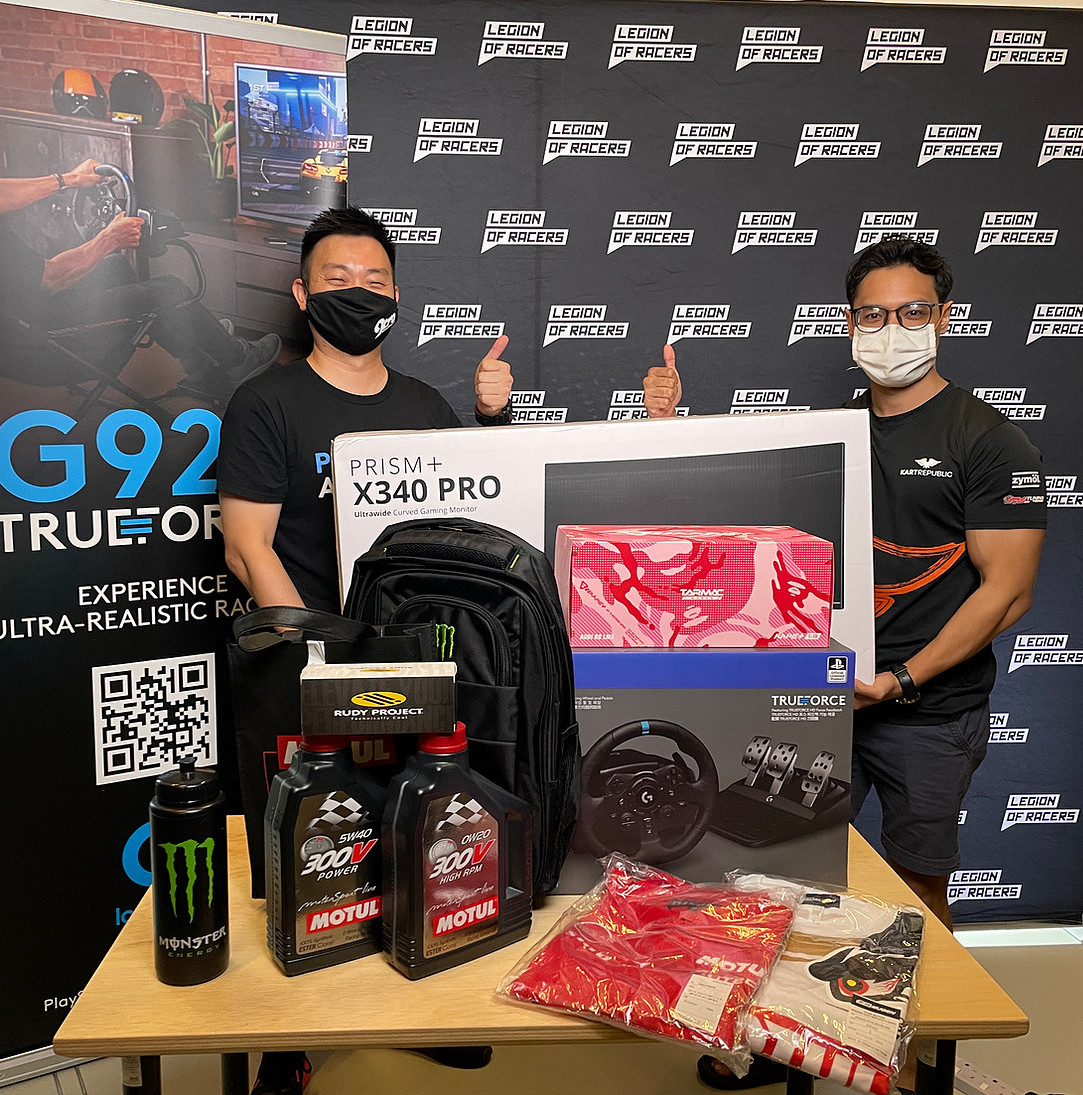 The win saw him walk away with a SGD300 Cash Prize and some amazing products that included the latest Logitech G923 Steering Wheel, the GTTRACK PLAYSTATION EDITION Racing Simulator by Next Level Racing, and oil products from MOTUL.

After a 3-week Time Attack Qualifier that saw more than 50 drivers taking part, the top 8 fastest drivers from the Qualifiers were then invited to a SuperPole Final that was held in Legion of Racers very own Xperience Studio.

With experienced Sim Racers such as Ar Muhammad Aleef and real racing drivers like Hong Yang and Zaim in the Final, the competition was bound to go down to the wire.

All 8 drivers were kept in suspense as the car and track was only revealed on the day itself and all of them were only given 10 minutes of practice and 3 flying laps to record their fastest lap time.

With the order of the drivers being reversed from the Qualifiers for the Final, this meant that Mark Voltaire was the first driver to set his lap time with Zaim going last.

The competition started to heat up when Jyn Mazvi, who was 3rd in the order, put in a lap time of 52.286 seconds around Willow Springs in the Corvette C7.

As Hong Yang and Muhammad Thasbeeh who was up next could not better his time, Jyn was in provisional pole with 3 more drivers left remaining to set a lap time.

All eyes now were set on Aleef given his track record and he did not disappoint as he immediately set a 52.041 seconds lap time on his first flying lap that placed him on top of the timesheets.

With only two drivers left that could potentially stop Aleef, the pressure was all on Ethan Yoh and Zaim.

After closely matching Aleef’s lap time on the first two laps, Ethan, unfortunately, made a mistake on his final lap and could only settle for a provisional second with a lap time of 52.107 seconds.

Zaim was the last driver to take the driver’s seat and all hope seems lost to him when he made a few mistakes on his first two laps.

Then with the final lap left, it was all or nothing for Zaim. Halfway through the lap, Zaim managed to find some pace and was marginally quicker than Aleef, which kept everyone on their feet.

He kept his cool and managed to clock a lap time of 52.019 seconds when he crossed the line, narrowly beating Aleef by 0.022 seconds to take the win!

Zaim said, “I am definitely thrilled to achieve my first win in an e-sports competition, especially against a few of the best e-sports drivers in the region. I am excited to see what e-sports can bring in the future for me”.

“It was great seeing such a close battle in the SuperPole Final and I’m glad all the drivers enjoyed it. Once again, I would like to thank all our partners and sponsors for the support as we could not have pulled off this event without them”, said Melvin Moh, the Co-Founder of Legion of Racers.