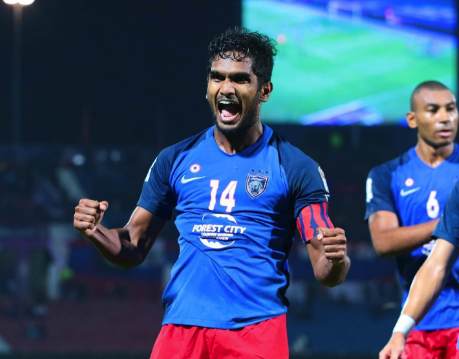 In what is surely a shock announcement, Singapore Lions skipper who plays across the Causeway at Malaysia Super League sure Johor Darul Ta’zim has left the club, and will be returning to Singapore.

The Lion City Sailors posted a short video at 5.50pm in which Hariss appeared and said he was “coming home”.

“The SPL is where I started to build my career, and it’s wildly exciting to now be a part of the Lion City Sailors’ vision of building up a club that can act as a catalyst for the SPL and Singapore football.”

“I’ve thoroughly enjoyed my time with JDT, and it was an honour to have worn the armband for a team that enjoyed tremendous success on the pitch while also making amazing improvements off the field too. I’d like to express my gratitude to Tunku Ismail for his leadership and trust in me, and I’d also like to thank the JDT team, staff and the people of Johor for welcoming me as one of their own.

“I can’t wait to get started on my next chapter with the Sailors, and I look forward to years of Sailors’ on-field success and off the pitch progress.”

He will join the Sailors after the international break in June.

“JDT and Hariss have mutually terminated the contract in respect of Hariss’ decision to return to Singapore due to family matters as the Covid-19 pandemic has made it impossible to travel back home on a more regular basis.

“JDT would like to thank captain Hariss Harun for his undivided loyalty, passionate performances and ever-present services to the club since his debut in January 2014.”

The Singapore and JDT skipper has made 197 appearances, played 15,367 minutes, scored 12 goals, made five assists and protected the backline from midfield many times for JDT, said the statement from JDT.

“Hariss can truly call himself a JDT legend,” JDT declared.

In a follow up statement posted on the JDT Facebook page, the Crown Prince of Johor, HRH Major General Tunku Ismail Ibni Sultan Ibrahim said that Hariss will always be part of the JDT family, and was a JDT legend.

“When I started this project in 2013, I didnt know much about the local football scene. I started to understand more in 2014 and realised that this club was missing a defensive midfielder — a backbone of the team — and this was my first signing for 2014.

“I met this young guy and told him about my project, intention, what was missing at the club and asked if he could help. He was about to go to Portugal and I convinced him to come here to win titles.

“He decided to be with us when this team was nothing. We didn’t have a training ground, no transportation, no office and such.

“Today, JDT have become very successful and Hariss Harun has been an integral part of this club.

“Hariss, I would like to personally and on behalf of the club, thank you and wish you all the best in your career. You will always have my support, our support and you will always be part of the JDT Family, and a JDT legend.”

This story is developing and will be updated.