From having to share a pair of boots, to a Tiger Cup winner. 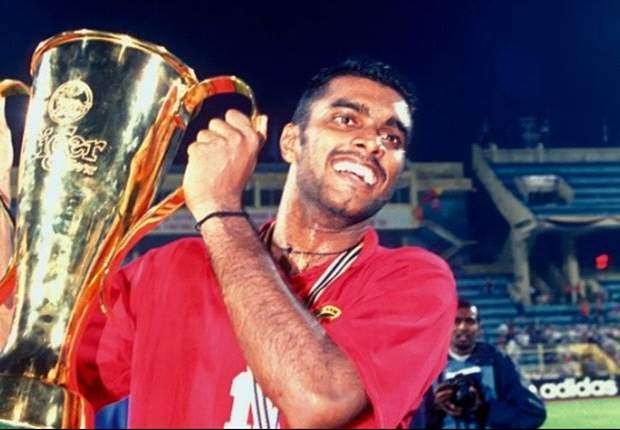 His goal in Hanoi in 1998 against the host nation Vietnam won Singapore its first regional title but growing up, R. Sasikumar to share a pair of boots with his elder brother when they first started playing football as kids.

In an interview with tech logistics firm Bluorbit which is produced by SW Strategies, the former national defender whose goal in 1998 won Singapore the Tiger Cup recalled his journey while growing up in Ang Mo Kio.

“It was a $10 pair of boots called Torch from China and the worse part is that its four by two so for wet weather we will use it to play and use it on really hard ground,” he said.

He added that there was a “twist to this whole story because there is only one pair of boots” and his father had to buy for his elder brother R Balasubramaniam (picture below) who was two sizes smaller.

“That is how I was introduced to football.”

Sasikumar played his youth football for Gibraltar Crescent, a team in the Premier League and was then spotted by former national youth coach Robert Lim who was watching Sasikumar play in Gibraltar’s U19 side.

“All of a sudden I got a call from the club to say that I have to report for Singapore ‘B’ team training.

“I was really shocked because I had never played senior football, I was just playing U19s.”

From there, he then moved on to the Singapore ‘B’ team, the intermediate squad to the Lions senior team, and was then a member of the Singapore Pre-Olympic team under the tutelage of Englishman Barry Whitbread.

It was Whitbread who led the Lions to the 1998 Tiger Cup, a competition Sasikumar said will remain etched in his memory for a long time to come.

Sasikumar recalled how for four years he was constantly telling Whitbread that he would score a goal each time he took to the field.

“We just had this belief that tonight was going to be our night and the funny thing is that for the previous four years, whenever I played for Barry in the national team, I always said “coach, I am going score tonight” so just before the game he said “this will be a nice time for you to score. You have been saying it for 4 years,” recalled Sasikumar.

“When I scored that goal, it was completely silent at the stadium except for a few Singaporeans there celebrating and stuff like that.

“So it didn’t really occur to me how big that goal was until much later.

“We were living in that moment and it was such a beautiful moment and I keep saying it,” he said.

His goal and the manner in which it got into the back of the Vietnamese goal at the 1998 Tiger Cup was later dubbed as the “Blade of God” because it came off his shoulder blade.