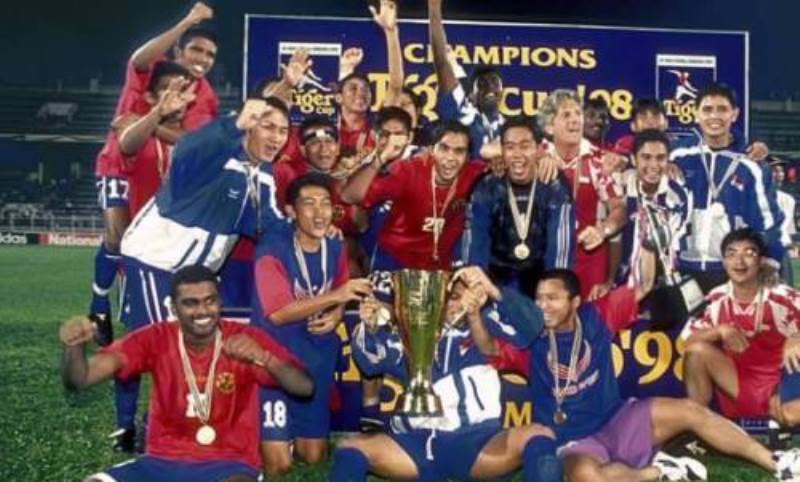 His solitary goal scored through his shoulder blade won Singapore the Tiger Cup in 1998 in Hanoi but little did many realise that just moments before he planted the ball behind the back of the net, both R Sasikumar and fellow defender Kadir Yahaya almost came to blows.

In an interview with tech logistics firm Bluorbit which is produced by SW Strategies, the former national defender recalled how the atmosphere on the field was nothing short of intense.

“We wanted to win so badly,” he had recalled.

“Myself and Kadir, we almost came to blows.

“I mean Kadir is a winner, I am a winner and we just wanted to win.

“If there was one example in my career of two players wanting the same thing but trying to kill each other, it was that game.”

Leading up to the tournament in Vietnam, the Lions had been going through a bad patch and only months prior at the end of 1997, the team returned from Jakarta without a medal to show, having lost to Vietnam in the playoffs for the bronze medal.

In addition, players like Fandi Ahmad, V Selvaraj, Saswadimata Dasuki and Lim Tong Hai, all considered stalwarts of the Lions squad, did not make the trip to Vietnam for the Tiger Cup.

“Singapore was going through a tough patch at that time with the national team, so much so that none of the, except for two journalists, no other media actually bothered to turn up in Vietnam because this was a young bunch of untested players at international level.”

But he felt that there was something different about the team as the team landed in Hanoi and began their preparations for the first match against Malaysia.

“I realised that this was a very different national team that what I was used to.

“There was something special about this team. Everyone was there to win.

The Lions began the tournament with a 2-0 win over Malaysia, and then went on to draw the host nation Vietnam in the second match before beating Laos 4-1 to top Group B.

The competition rules also had stated that the team which tops Group B would have had to travel to Ho Chi Minh to play against the second placed team in Group A which then led to the fiasco of both Indonesia and Thailand playing out a farcical match which led to the Indonesians scoring an own goal in the dying minutes of the game to ensure that they remained in Ho Chi Minh City for the semi-final clash.

“Barry didn’t even bother giving a team talk or whatsoever.

“He came into the room and basically said, “if you guys had any pride, if you feel anything in you, the way you were disrespected by these two teams that they are trying their best to lose so that they can actually play against you, you go out there and show them why they should actually play you,” said Sasikumar.

The Lions went on to defeat Indonesia 2-1, through goals by Nazri Nasir and Rafi Ali, and then flew back to Hanoi for the final against Vietnam, which had beaten Thailand in the other semi-final 3-0.

And although it has been more than 20 years since the final, Sasikumar recalled very vividly how the team reacted after his goal in the 70th minute silenced the home crowd.

“Ironically it was Kadir that crossed the ball for me to score and after that he ran over and we hugged and made up because that is the beauty of this team,” said Sasikumar.

“When I scored that goal, it was completely silent at the stadium except for a few Singaporeans there celebrating and stuff like that.

“We can disagree, we don’t have to like each other. But when we put on the shirt it means a lot to us. We are now fighting for the same flag.”

The Lions did not manage to defend their crown at the 2000 Tiger Cup, with Vietnam and Malaysia both delivering killer blows which led to a group stage exit.

It was also similar fate for the Lions at the 2002 Tiger Cup tournament, until the Lions recaptured the regional title following victory at the 2004/2005 competition.