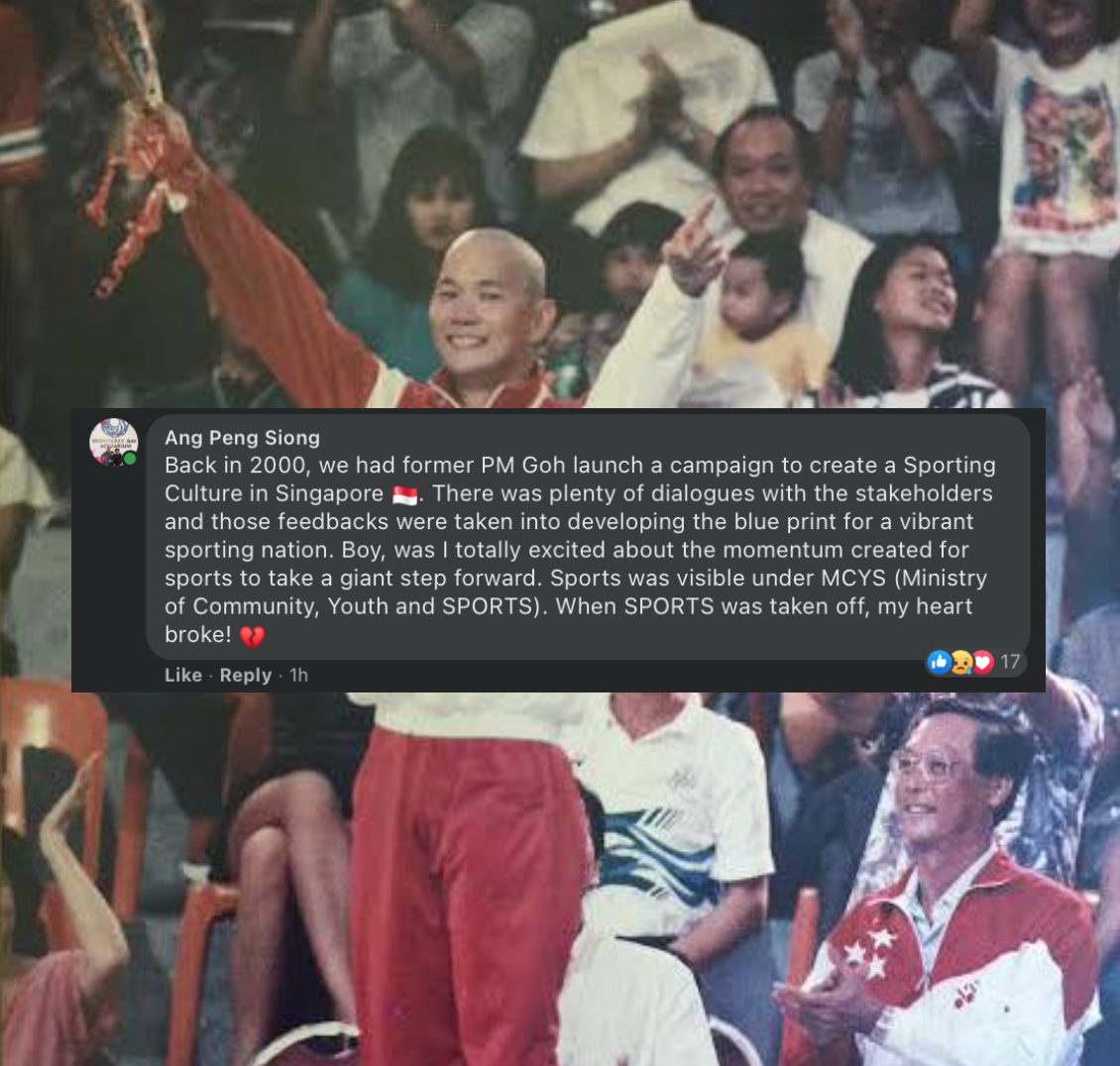 One of Singapore’s finest athletes Ang Peng Siong has revealed in a Facebook comment that his heart broke when the Ministry of Community Development, Youth and Sports (MCYS) was renamed in July 2012.

Ang, who in 1984 was the world’s fastest swimmer over the 50m freestyle, made the comment in a Facebook post which was put up by diplomat and lawyer Professor Tommy Koh.

He said, “Back in 2000, we had former PM Goh launch a campaign to create a Sporting culture in Singapore.

“There was plenty of dialogues with the stakeholders and those feedbacks were taken into developing the blue print for a vibrant sporting nation.

“Boy, I was totally excited about the momentum created for sports to take a giant step forward.

“Sports was visible under MCYS (Ministry of Community, Youth and SPORTS).

“When sports was taken off, my heart broke.”

What was Ang referring to?

On 31 July 2012, a year after the 2011 General Elections, the Prime Minister’s Office (PMO) announced the restructuring of both MCYS and the Ministry of Information, Communications and the Arts (MICA), and a new ministry, the Ministry of Culture, Community and Youth (MCCY) was born, as part of a Cabinet reshuffle.

Historically, MCYS did not start as MCYS.

In 1985, a new entity, the Ministry for Community Development was created with S Dhanabalan being appointed as its first Minister.

In 2000, the Ministry was renamed the Ministry for Community Development and Sports, with Abdullah Tarmugi at the helm.

Then just four years later, the Ministry morphed into the Ministry of Community Development, Youth and Sports, with the announcement being made right smack during the London Olympics, on 31 July 2012 with the changes taking effect on 1 November 2012.

As part of MCCY’s function, it was tasked at looking at sports development, which included promoting sports for all, nurturing sports excellence and developing the sports industry.

For the record, Singapore won two bronze medals at the London 2012 Olympics, through the women’s table tennis team and through Feng Tianwei in the women’s singles.

The paddlers have not won any medals since then, and returned home empty from both the 2016 Rio Olympics and recently concluded Tokyo 2020 Olympics.