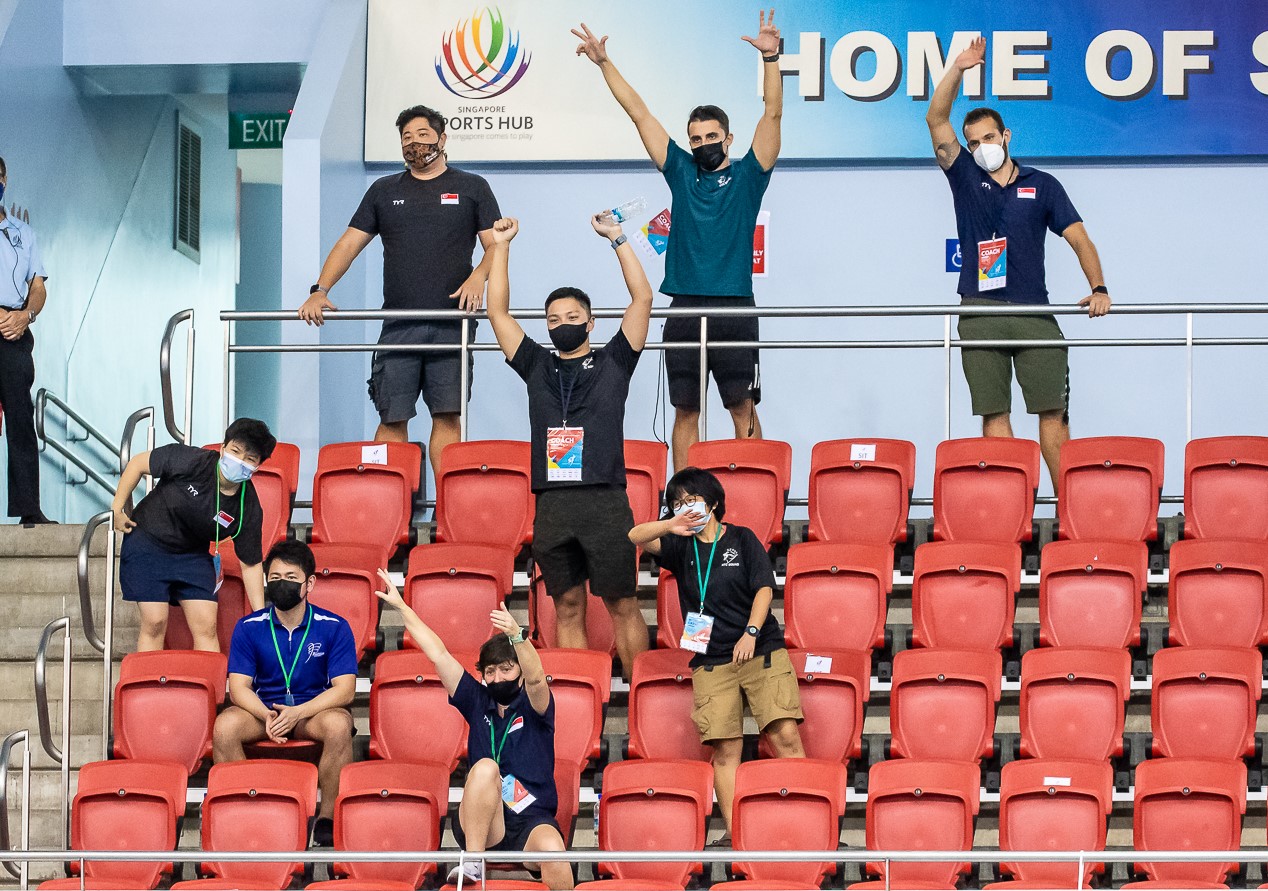 The final day of competition of the 9th Singapore National Swimming Championships (Short Course Metres) on 28 November at the OCBC Aquatic Centre saw even more national records fall and more swimmers qualify for the FINA World Championships (25m) to be held in December.

The most impressive of the lot had to be Quah, who set three new records in the day itself, including taking down Joscelin Yeo’s 21-year-old record in the Women’s 200m Individual Medley.

She followed that up in the evening finals with an even more impressive swim, shaving off almost three seconds from her morning time, when she stopped the clock at 2:07.32s.

The Men’s 200m Individual Medley saw the national record change hands twice in the space of a few hours, with Pang rewriting his own national record that he set in 2017 of 1:58.42s with a determined swim in the morning heats, to set a new record time of 1:58.05s.

Then in the evening finals, Ang went head-to-head with Pang, and eventually touched home first in a time of 1:57.18s, to break Pang’s record.

Pang’s time of 1:57.79s was also better than his morning record time.

Full-time swimmer Teong claimed his third national record in the space of four days, as the 24-year-old blitzed his way to a new record time of 21.27s in the Men’s 50m Freestyle, rewriting his time set in 2019 of 21.41s, while butterfly specialist Ong Jung Yi also added his name to the record books as he rewrote Quah Zheng Wen’s 6-year-old record in the Men’s 200m Butterfly with a time of 1:56.42s.

Six-time SEA Games champion Amanda Lim clinched her spot to the World Champs with a perfectly timed swim in the Women’s 50m Freestyle, stopping the clock at 24.60s, the exact FINA “A” Cut timing needed for qualification, while Marina Chan earned her place courtesy of a time trial in the Women’s 50m Butterfly, qualifying with a time of 27:00s, going under the FINA “B” Cut mark of 27.05s.

“Looking at it historically from the last few meets that we had, to be very honest, we had been underperforming to a certain extent, even at the Olympics, where things were a little bit tougher on us, it’s always good to come out of this slump with a renewed sense of energy with the team.

“Coming into this meet, we did not have much expectations, and the coaching staff’s focus was on getting as many swimmers on the team to World Champs and how we wanted our athletes to go out there and start racing hard, and we saw that today and over the last few days and it has been really great, and I could not have asked for a better meet this time”, he said.

“One of the key reasons I would attribute the success to is the renewal of people, we got new coaches on board, just different sets of energy that we brought to the squad as well as to the meet and the whole meet seemed more relaxed, more fired up and that’s where we actually saw a whole lot of times dropped in the process as well.

“The last couple of days we saw the young guns stepping up, as well as those who did not qualify for the Olympics, and actually to have the current crop of swimmers actually outperform where I would have actually expected them to perform have been amazing”, he added.

When asked to pinpoint what has changed in the attitudes of the swimmers and coaching team, Tan said, “For me, I think the coaches on deck and the people around are more relaxed and happier, and to be very honest, I think it is the weight that has been lifted from the disappointment of the Olympics.

“It is just a case of moving on and writing a new chapter for Singapore swimming.”

The final list of qualified swimmers for the FINA World Championships (25m) 2021 will be announced by 1 December 2021.