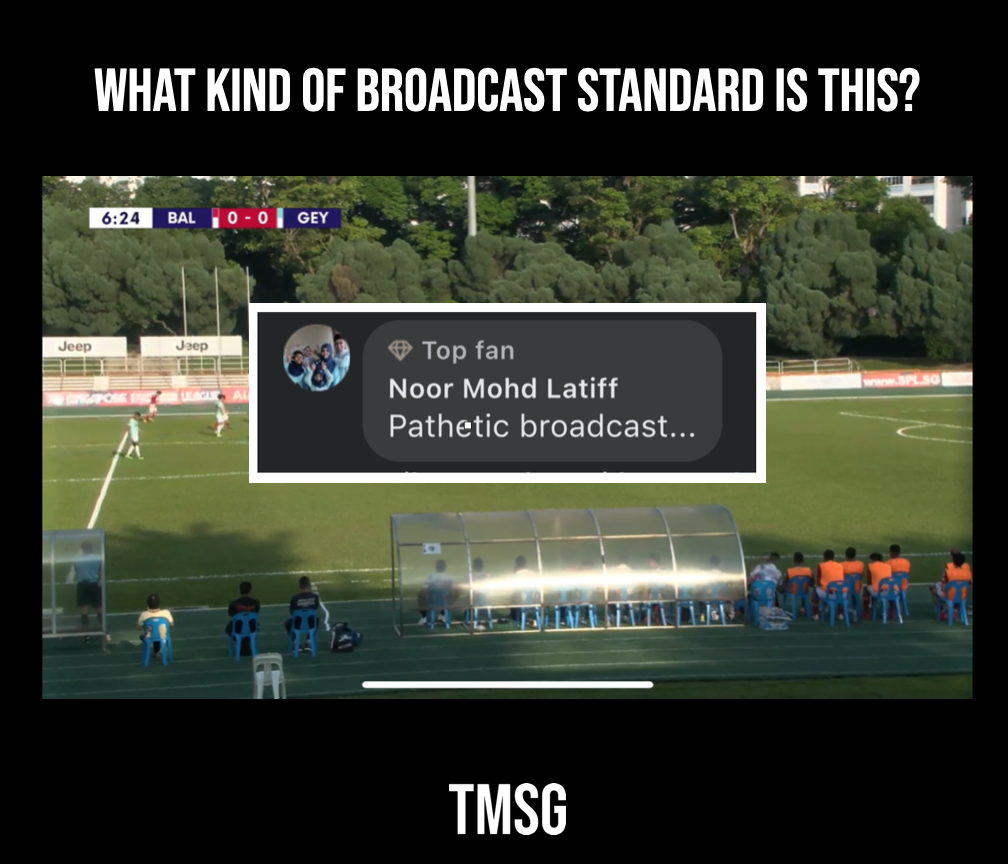 Singapore football fans who were watching the Balestier Khalsa versus Geylang International AIA Singapore Premier League clash on Youtube on 2 July over their mobile phones were left wishing they had the aid of microscopes.

The poor broadcast angle from the main broadcast camera was so bad that fans could not even fathom what was happening on the pitch, let alone identify the players.

This comes just weeks after the Football Association of Singapore (FAS) themselves proudly proclaimed over their website that fans could look forward to enhanced broadcasting.

On 17 June, the FAS said in a blog post that it was bringing the viewing experience of the AIA Singapore Premier League latches to “greater heights” and it “enhances broadcast coverage”.

Surely, they must have been high on something when they made that assertion, because the lack of height for the main camera at Toa Payoh Stadium was exactly what fans felt rather nauseated by.

And enhanced was not exactly what fans witnessed for the Balestier and Geylang clash unfortunately.

Here are some of the screen grabs taken during the live broadcast of the match, which Geylang won 2-0.

Fans reacted to the post put up by TMSG on 2 July during the match.

Apart from the quality of the broadcast, viewers were also amused that the reserves were sitting on what appeared like “coffee-shop chairs.”

The Singapore Premier League (then called the S-League) was inaugurated in 1996 by then Prime Minister Goh Chok Tong.

The S-League was rebranded and renamed the Singapore Premier League in 2018.

During the ceremony to mark the change, FAS President Lim Kia Tong said, “This is definitely not a cosmetic relaunch.

“A lot of effort and a lot of thinking had been put in to create this new logo. This rebranding reflects the four pillars (the SPL’s four foundations) and, if we keep emphasising the four pillars, we hope that it will bring results and it (the rebranding) is not a cosmetic change.”

Fans can decide for themselves whether the change has been cosmetic or otherwise.