Vietnamese fans upset at not being allowed to enter Jalan Besar Stadium, police called in. 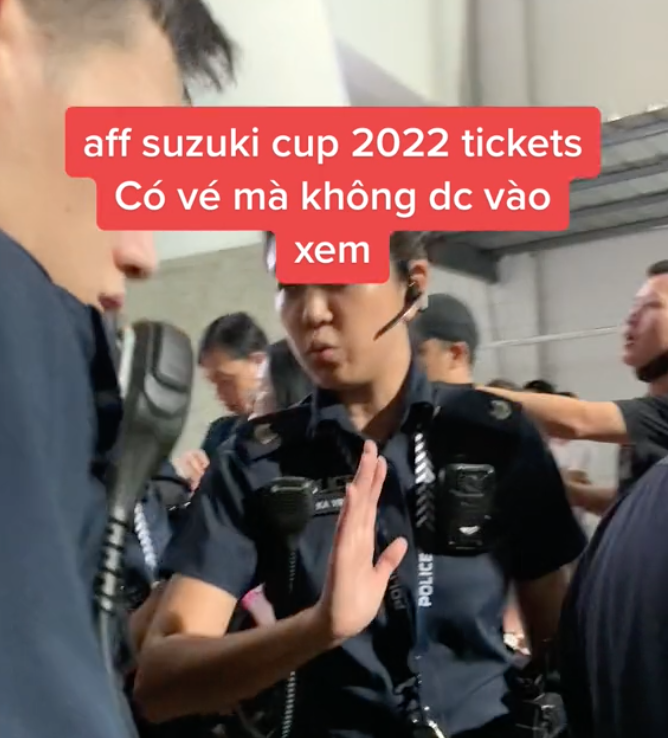 While the 0-0 stalemate was being played out in the Jalan Besar Stadium on 30 December, there was drama outside the venue, with police being called in.

Many Vietnamese fans claimed that they were not being allowed to enter the venue through the North and South entrances despite having tickets.

The North and South Entrances of the stadium were meant for Singapore fans, and security personnel at the entrance areas were checking for identity before allowing fans to enter.

One TikTok video showed how a police officer with a loudhailer was explaining to the Vietnamese fans that the area they were trying to gain access to were only meant for Singapore fans.

“I understand everyone here wants to watch soccer, to support Vietnam,” the officer is heard saying.

“You need to understand that the management already put in a way that only Singapore fans are allowed to enter.”

In another TikTok video, a few Vietnamese fans were seen asking a local organising official for refunds.

A blog post on Vietnam Posts revealed that Vietnam fans were miserable after it was made known that only fans with Singapore identity cards would be allowed to purchase and enter the main stands.

Doan Quang Linh, an active member of the Singapore Life fanpage, which has nearly 75,000 overseas members registered was quoted as saying that “this new regulation is like a thunderbolt that strikes everyone’s desire, because very few people can buy tickets for Vietnamese fans.”

This was unlike the 2020 edition of the tournament where Vietnam fans literally made Bishan Stadium their home ground.

Singapore fans who were trying to enter the North and South entrances also revealed how several Vietnamese fans had asked for help to be brought into the venue.

One female Vietnamese fan even held the arm of a civil servant as he was entering and asked him to pretend that she was his girlfriend.

“She even asked for my phone number,” he revealed.

Most comments from Singapore fans on the videos indicate that the FAS was right in denying entry to the fans who were clearly not meant to be in the main grandstand areas.

The Vietnamese fans had also said that they had purchased tickets from the black market, possibly from Singaporean buyers who then sold the tickets off to Vietnamese fans.

MAIN PHOTO: TIKTOK
Have a story for us? Write to us at hello@tmsg.sg or drop us a DM on our socials.