Reform Party man aiming for FAS seat. No deposit lost if he is defeated. 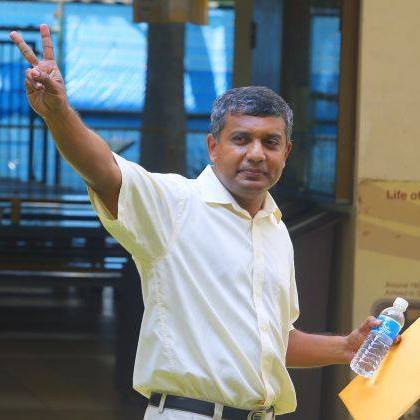 While we know that it will be two main teams battling for supremacy for the right to take control of the Football Association of Singapore (FAS), what made heads turn when nominations closed on Saturday, 25 March at 6.00pm was the name of one Kumar Appavoo, who had submitted his nomination for one of the independent seats.

Baffled. Heads scratching. And then it hit many who exactly Kumar Appavoo was.

In the GE 2015, Appavoo stood as a candidate in the single seat ward of Radin Mas along with Han Hui Hui, who stood as an independent.

He almost lost his deposit when he polled 12.72% of the votes cast.

Appavoo is also notoriously known for his elections speeches, which has him yelling unintelligibly at times.

It is not known why Appavoo has decided to run for elections to earn a seat in the FAS but he did tell the Straits Times that his father, Pakire Appavoo, used to be active in the old Singapore Amateur Football Association.

There is also a Pakire Appavoo Memorial Cup which was organised in 2014.

Well, at least one thing is for certain. He will not lose any deposit if he doesn’t poll enough votes to garner a seat in the executive council.

But, please spare us and no speeches please.