This is not cool, Singapore Recreation Club. 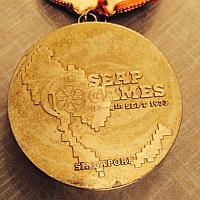 A former Southeast Asian Peninsular Games gold medalist in hockey has claimed that his medal, which he loaned to the Singapore Recreation Club, has gone missing.

And what is worse, the SRC has been avoiding all calls from the Straits Times over the matter for a period of about nine months.

In a Straits Times report published on 17 January, former Singapore hockey international Farleigh Clarke has alleged that his 1973 SEAP Games gold medal and an old jersey which featured some of Singapore’s Eurasians have both gone missing.

Clarke was a member of the Singapore side which beat Malaysia 2-0 at the Jalan Besar Stadium in September 1973, the only time the Malaysians have lost a hockey men’s final at the regional Games.

“There were some renovation works done at the club, and one of our members noticed early last year that the medal was no more on display after those works were completed,” Clarke told the Straits Times.

“I have tried to ask club officials and even wrote in officially last year (in mid-December) asking for them to return the medal, but the club has not responded at all.”

The medal and jersey has been on display at the Padang club since 2003.

The jersey is said to have belonged to Clarke’s father Andrew, who had apparently played alongside Mr E.W. Barker, one of Singapore’s former Law Ministers and a former President of the Singapore National Olympic Council.

The Straits Times report added that the paper first approached SRC about the missing medal and jersey “in April last year”.

The club said that it would reply to queries after its annual general meeting on April 28, 2018.

However, the SRC has not responded “despite follow-up e-mails, calls and text messages”.

The 1973 SEAP Games was hosted by Singapore, for the first time in the history of the Games.