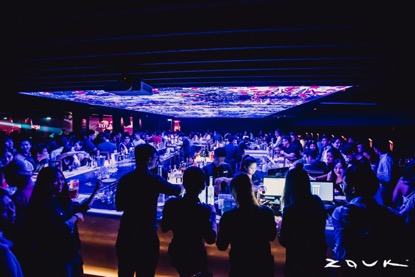 Legion of Racers has collaborated with Zouk as its official entertainment and venue partner for the inaugural Festival of Speed, where the first E-Racing Challenge will be held. Taking place on 21 September at Capital, the venue will also host the official closing party for the festival.

The Zouk E-Racing Challenge will serve as an entertainment experience for all fans of e-sports and the Singapore Grand Prix during the race season between 15 to 22 September. Held in Capital as part of the Festival of Speed’s Official Closing Party programme on 21 September, the Zouk x LOR Festival of Speed E-Racing Challenge commences at 7.00pm, and will be the forerunner to the Zouk F1 Garage Party from 10pm onwards.

As part of the entertainment, fans of antique cars can seize their special Instagram moment before entering the club with a display of a classic Porsche 964 Turbo and a Ferrari 308 GT4 Dino just outside the club.

The winner of the Zouk x LOR Festival of Speed E-Racing Challenge will bag a limited-edition helmet worth $8,000, bearing the signatures of Formula 1 2018 season drivers such as Lewis Hamilton, Sebastian Vettel, Max Verstappen, among others.

Tickets for the E-Racing Challenge start at $45, and are available at www.sistic.com.sg/events/fos0919.

The Festival of Speed will be donating S$1 to the Business Times Budding Artist Fund for every ticket sold.

The inaugural LOR Festival of Speed is supported by Singapore Tourism Board, as a part of its GPSS umbrella of events. See banner below for all of the Festival of Speed’s current partners which include Aston Martin, Excel Games Interactive, 9tro, Next Level Racing, Monster Energy, Zouk, Logitech, 18×3 and PAC.