Stage is set for e-racers to earn pro contracts. 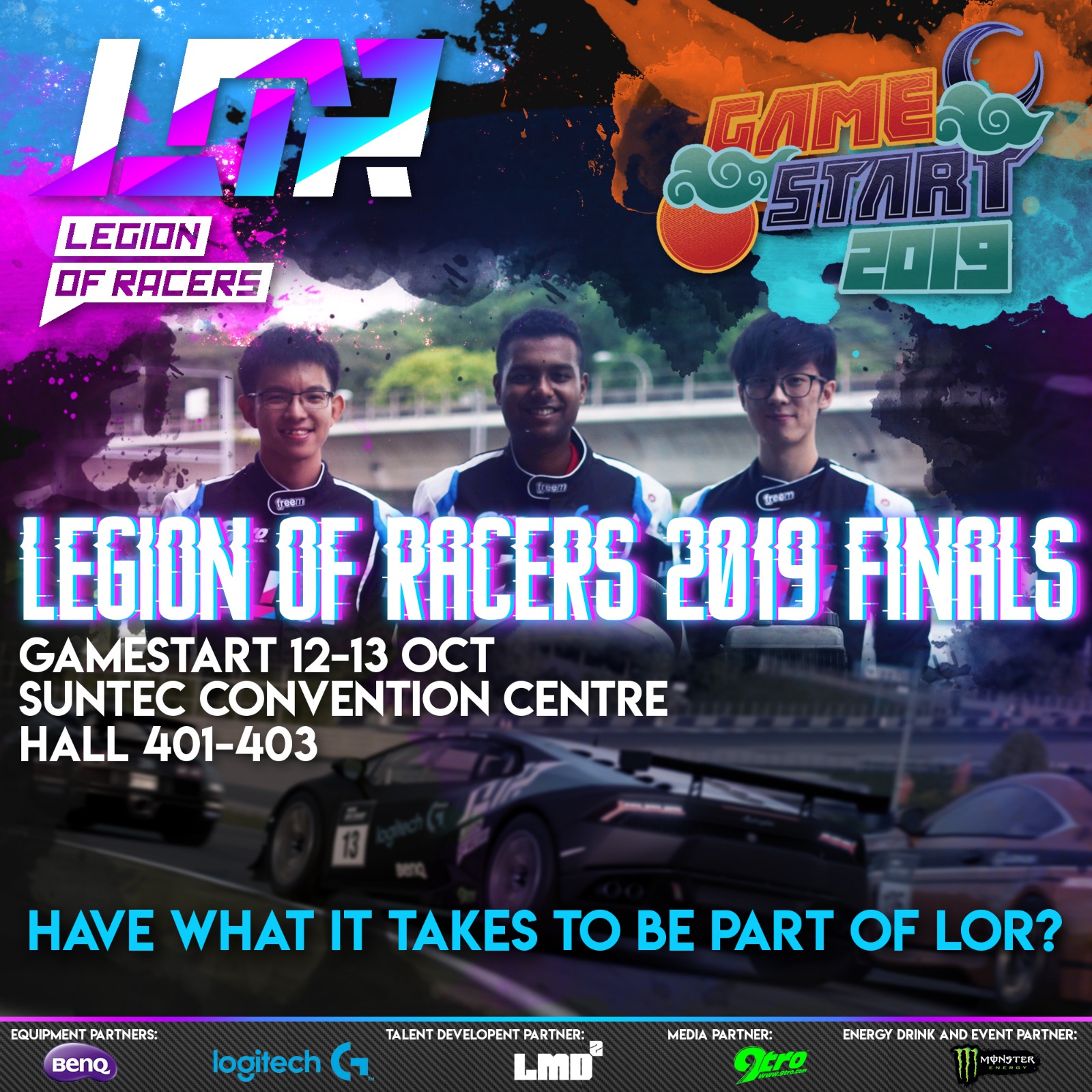 The search for the top Sims racers to represent the Legion of Racers for 2020.

Open to racers from around the Asian region, the top racers will be crowned at the upcoming GameStart 2019, Southeast Asia’s premier gaming convention which will be held on 12 and 13 October at Suntec City. Calls for registration started from 20 May onwards and continued till end of September 2019.

Three Sims racers – Jason Tay, Jaden Low and Muhammad Aleef were selected as professional e-sports athletes with Legion of Racers after GameStart 2018. All winners who represent the LOR will get an opportunity torepresent Singapore in major events like the F1 Esports Championship and the Gran Turismo Championship, if they qualify.

Said LOR co-founder Lim Keong Wee, “32 of the fastest e-racers from around the region will have an opportunity to earn professional contracts with the Legion of Racers from GameStart. The contract will give them the opportunity to participate under the LOR flag for major competitions.

For this season, the LOR is expecting to have Sims racers from Philippines, Malaysia and Indonesia attend GameStart 2019. The competition will be spread over two days, with the top 23 qualifiers advancing to the quarter-finals along with the nine previous LOR winners.

On Day Two, four groups of semi-finals will then to whittled down a semi-finals face-off with four finalists being eligible for the final run-off. The top three e-racers will win $35,000 worth of prizes and will also be inducted into the LOR team of athletes.

Among the competitions LOR are aiming to send teams to are the Raceroom Asia Championship League full season, the GT FIA Nations Cup season and also the Logitech G Challenge.

Said Jason Tay, a current e-sports athlete signed up with LOR, who was also one of the GameStart 2018 winners, “The last one year has been filled with learnings. Apart from participating in the various competitions which I had the benefit of participating in, we also were able to train in a go-kart with AutoInc. I am looking forward to GameStart 2019 and wish all participants the very best.”

Since being named as winners last year, the LOR team were champions of the Raceroom Asia Championship League with Jason Tay and Muhammad Aleef finishing in first and second spot respectively. In F1 Esports, the LOR team finished among the top 100 in the qualifiers and were 23rdin Asia in the GT Nations Cup.

Aleef and Jason were also top 16 in the world in the E Race of Champions. In the Logitech G Challenge, the LOR team were the champions of Singapore and Malaysia and made it to the Asia-Pacific finals in Melbourne.

Apart from getting the LOR e-sports athletes to participate in various events throughout the year, the LOR was also involved in the organisation of the inaugural Festival of Speed as part the Grand Prix Season Singapore 2019, in partnership with the Singapore Tourism Board.

Added Melvin Moh, co-founder of LOR, “It has been a busy year for all of us as we watched LOR grow from strength to strength. We are all looking forward to GameStart 2019, and hope we will be able to unearth some super e-racing talents at the competition.”